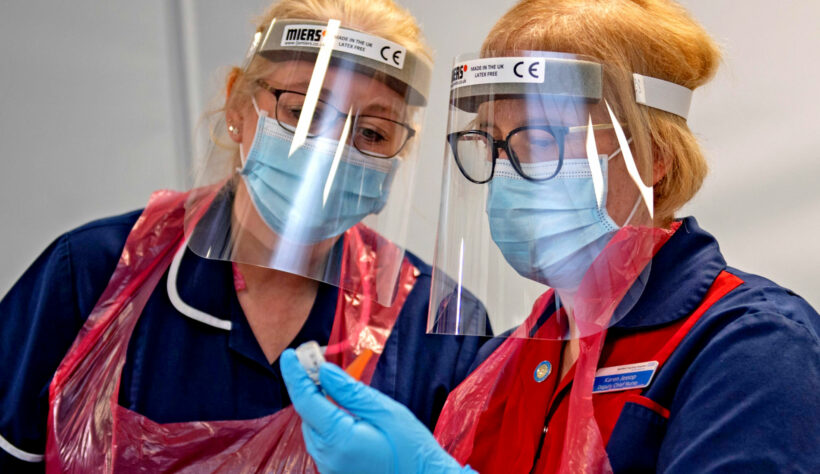 2 UK health care workers who received the new Pfizer/BioNTech vaccine on Tuesday, the first group of people to receive the approved vaccine against Covid-19 in the western world, have suffered adverse reactions. The 2 cases were out of the 1000s who have already received the new vaccine.

The National Health Service issued a warning yesterday that people “with a history of a significant allergic reaction to a vaccine, medicine or food” should not be vaccinated with the recently approved vaccine. Both of the medical workers experienced anaphylactoid reactions but had a “strong past history of allergic reactions”. Both have since recovered after treatment for their allergic reaction.

Adding to the warning against giving the Pfizer/BioNTech shot to people with “a history of significant allergic reactions”, the UK regulatory agency says the drug should only be administered “in facilities where resuscitation measures are available.”

Britain has became the first western nation to start mass-vaccination against Covid-19. Health care workers administered the first doses of the Pfizer/BioNTech vaccine to thousands of people across England, Wales, Scotland and Northern Ireland.

The Pfizer vaccine was approved by Britain’s independent pharmaceutical regulator for “emergency use based on preliminary data from Phase 3 human trials that showed it to be safe and highly effective”.

Pfizer, along with US drugmaker Moderna, and Britain’s Oxford University working with AstraZeneca, are currently waiting for Emergency Use Authorisation for their vaccines from the US Food and Drug Administration.

The first 800,000 doses of the Pfizer/BioNTech formula are going to people over 80 years of age who are already hospitalised or receiving outpatient services, as well as nursing home staff. NHS workers are also at the front of the queue. The approved vaccine will also be made available at individual vaccination sites once the high-risk patients receive their inoculations.

The UK plans for the NHS to wind-up its vaccination program in a bid to treat some 25 million of the most vulnerable citizens.

British health officials have made it clear the vaccine will not be mandatory.