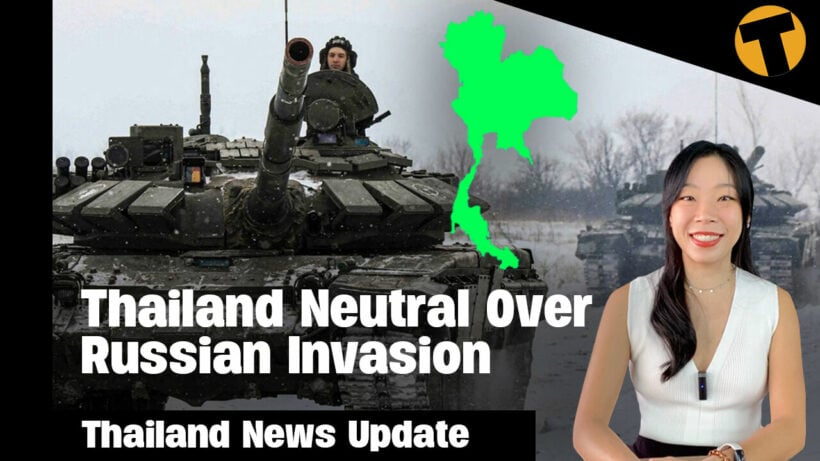 The Thai PM Prayut Chan-o-cha has announced that Thailand will maintain its neutrality in the Russia-Ukraine conflict. The government source announced that at a meeting of cabinet ministers discussed the issue extensively yesterday following some 25 ambassadors based in Thailand pressuring the government to speak out against Russia’s invasion of Ukraine. Addressing the meeting, the PM said that the long-standing relations between Thailand and Russia must be taken into account and Thailand must tread carefully. He went on to say…. Thailand must maintain a neutral stance and bring Thais in Ukraine back home quickly. After the meeting the PM said Thailand will adhere to ASEAN’s stance on the conflict between Russia and Ukraine and call for dialogue among parties concerned to resolve the situation. Preceding the PMs comments, 25 ambassadors met with the permanent secretary for the Foreign Ministry on Monday. They asked Thailand to speak out against the Russian invasion and support the UN General Assembly’s resolution on the Ukraine crisis.

Thai and Indian airlines will now allowed to offer flights through a travel bubble scheme between the two countries, allowing citizens and visa holders to travel relatively freely between Thailand and India. India’s Ministry of Civil Aviation has confirmed on its website that India has created an air bubble arrangement with Thailand, adding that both Indian and Thai carriers can now operate flights between the two countries. Foreigners and Thais travelling to India are required to hold a valid Indian visa and Indian nationals and foreigners travelling from India to Thailand must hold a valid Thai visa. According to the ministry, the airlines must make sure all the passengers meet the requirement for entry before issuing boarding passes to the passengers.But no mention of further details, like if applicants need to go through the Thailand Pass formalities like all other travellers.The travel bubble will be a welcome addition to the flow of travellers arriving in Thailand now that the tap has been turned off for Chinese travellers, and over the past week, Russians – two of the biggest tourist markets.

The Embassy of Ukraine in Thailand is seeking donations to support Ukraine and following Russia’s invasion. The embassy made a post on its Facebook page saying two special accounts in Thai baht have been opened to support the efforts. Both Ukrainian and Russian expats and tourists in Thailand have protested Russia’s attacks. Rallies have been held in Phuket, with crowds holding Ukraine’s national flag and balloons in the country’s colours of yellow and blue, calling for an end to the violence. If you’d like to make a donation there is an account number linked in the original story at thethagier.com

A MP from the Pheu Thai Party claims that the submarine that the government recently brought from China will be delivered without an engine after issues with a German engine supplier. The MP, and also Pheu Thai party leader, Yuttapong Charasathien, is criticising the 12.42 billion baht submarine purchase from a Chinese firm, saying the “deal lacked transparency”. Yuttapong says the submarine, which is scheduled to be delivered next year, should at least be included with an engine. He also questioned the credibility of the Chinese specialists who were expected to take control of submarine pier construction because they were registered with Thailand’s Ministry of Labour as Chinese-language teachers.Earlier reports say that the German supplier would not sell a submarine engine to the Chinese firm because it would be used in a submarine that would later be sold to another country.

Thai officials plan to make Phuket a “world class health destination.” The Cabinet just approved a 1.4 billion baht budget to develop health and wellness centres on the southern Thai island and improve medical services. Over 45 acres of state-owned land in Phuket will be used to develop health centres and facilities. The project was expected to take four years to complete and construction will start next year. The health facilities will be developed in line with world standards to place Phuket as a top destination for medical tourism, according to a spokesperson for the prime minister. The budget would be used to improve technology, medical science techniques, and the island’s public health system. The idea of a health and wellness hub isn’t exactly new. Back in 2020 Phuket officials were setting aside 4 billion baht to transform medical tourism in the southern province of Phuket, by developing a state-of-the-art treatment hub in the north of the island near Mai Khao Beach. Even earlier than that, a plan was first suggested in 2017, by then then governor.

As Russia’s attack on Ukraine enters its fifth day, the Ministry of Foreign Affairs says around a hundred Thai citizens evacuated from the country will arrive in Thailand today in a first round of repatriation flights. The ministry said the first group of 38 Thai evacuees departed from Bucharest and arrived this morning, the second group of 58 will arrive on an Emirates flight today around lunchtime. These commercial flights are deviating from their usual routes to assist in the evacuation effort. The evacuated Thai nationals will be sent to Sattahip naval base for a 1 day quarantine… the same procedures required for anyone arriving in the Kingdom at this time. The Foreign Ministry reports that 142 Thais have already been evacuated from Ukraine; 103 are in Warsaw, Poland, and 39 in Bucharest, Romania. Others were on their way to western Ukraine.Meanwhile, the ministry maintains that the remaining Thais stranded across Ukraine are currently safe.

RogerS
To remain neutral when a sovereign country is being brutally attacked is condoning the actions of Russia. If the Thai Government wants to remain neutral, then I think potential tourists from democratic countries should choose not to visit Thailand.
CharlesW
Just obeying their Chinese masters ...