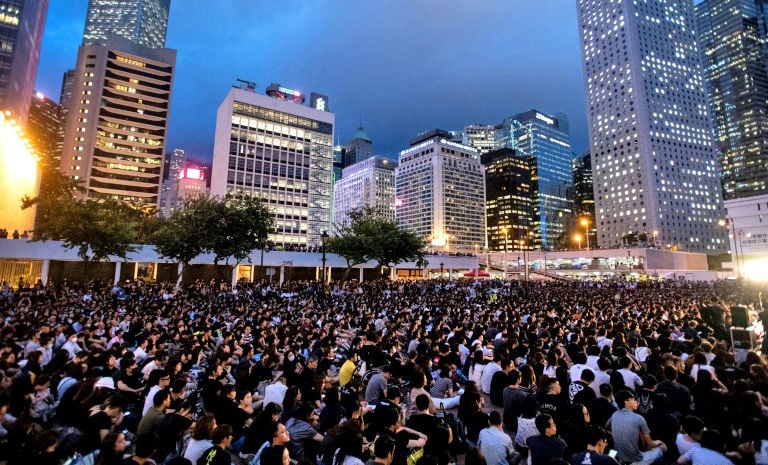 Anti-government protesters kicked off another mass rally yesterday as they defy increasingly stern warnings from China over the unrest that has plunged the city into crisis.

The semi-autonomous Chinese financial hub has seen two months of protests and clashes triggered by opposition to a planned extradition law. Emboldened by the early win for the proposed extradition laws to be withdrawn, the protesters have ramped up the protests to target other democratic reform.

Authorities in Hong Kong and Beijing this week signalled a hardening stance, including the arrests of dozens of protesters, and the Chinese military saying it was ready to quell the “intolerable” unrest if invited by HK authorities.

But protesters have remained unyielding, vowing to hold multiple rallies and marches throughout the weekend and into next week.

Thousands of protesters filled a park in the densely populated neighbourhood of Mongkok, which has previously seen clashes between police and demonstrators, listening to speeches and shouting slogans.

Police initially denied activists permission to march through the neighbourhood but later allowed it after an appeal.

Two marches are also planned for today — one on Hong Kong island and the other in the Tseung Kwan O district — as well as a city-wide strike on Monday and rallies in seven other locations. The call for strike action appears to be gaining more traction than previous walkouts, with a host of organisations and unions vowing to join.

Under the terms of the 1997 handover deal, the city has rights and liberties unseen on the mainland, including an independent judiciary and freedom of speech.