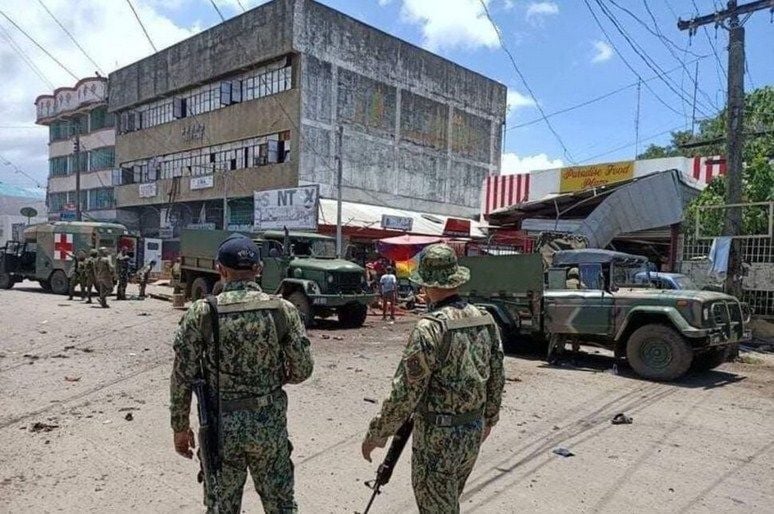 More violence in the southern Philippines as Islamic militants exploded powerful bombs in the region yesterday. At least 14 soldiers and civilians were killed, and another 75 injured, despite all the additional security –  Islamic State militants have made threats in recent weeks.

At least 5 soldiers and 4 civilians were killed as a result of the first attack near a town plaza and a Roman Catholic cathedral. A bomb, attached to a motorcycle exploded around midday near 2 parked army trucks parked in front of retail shops in Jolo, Sulu province in the far south of the archipelago. The area is a predominantly Muslim province, amongst the predominantly Catholic country.

Then a second blast, reportedly from a female suicide bomber, occurred an hour later killing the bomber and a soldier.

A third unexploded bomb was found in a Jolo market. The entire town was then placed in a security lockdown by troops.

Nearly 40 soldiers, police and civilians were wounded in the bomb attacks, military and police officials said. There has been no claim of responsibility for the attacks, but the Philippines military are blamed an Abu Sayyaf militant commander for the sequence of bombs.

Like the southern part of Thailand, southern Philippines have been racked by decades of violence inspired by religious and ethnic tensions.

Military officials reported last week that Hatib Hajan Sawadjaan, a Filipino militant affiliated with the Abu Sayyaf, was planning to launch bombings in Sulu using 2 female suicide attackers. Army troops were trying to locate and capture Sawadjaan and the 2 bombers 2 months ago when 4 army personnel were stopped at a Jolo checkpoint and then shot and killed by police personnel. The army believe the encounter may have been a misunderstanding between the army and police forces but has ramped up the violence and the rhetoric ever since. The army has been unable to apprehend Sawadjaan.

Military officials are speculating that yesterday’s bombings may have been staged as a retaliation for the arrest and detention of one of the groups’ key leaders.

The Abu Sayyaf are a violent group that have aligned themselves with the Islamic State and been branded by the US and the Philippines as a terrorist group. They’ve been responsible for bombings, ransom kidnappings and beheadings in the southern region of the country.

Army officials believe that participant fighters of Abu Sayyaf have dwindled to a few hundred over the past few years. One of the key leaders of the group has been blamed for kidnappings and beheadings of hostages, including foreign tourists.