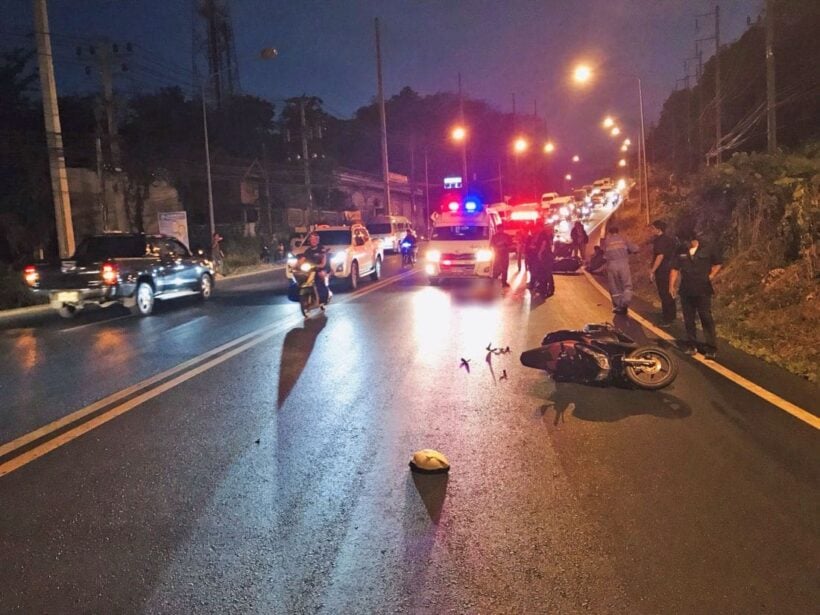 A motorbike driver has died after slipping on oil spilled on the road. The woman fell off the motorbike and was crushed by a water truck in Kata last night. Two others motorists also sustained injuries. Police are searching for the truck driver.

Police and emergency responders arrived to find a body of a woman, later identified as 26 year old Natticha Attachewa from Phetchabun in north-central Thailand.

Her damaged motorbike was lying on the road nearby. Her body was taken to Vachira Hospital in Phuket Town.

Two other people injured were 25 year old Pachara Plaisang and 25 year old Tanarat Tipwimonkarn, both travelling on another motorbike behind her. They were taken to Chalong Hospital.

Karon Police say that the two motorbikes were heading from Kata to Chalong on Patak Road over Kata Hill. They say that when the bikes arrived at the scene, Natticha’s motorbike slipped on oil on the road. She fell off the motorbike and was crushed by a water truck driving just behind Natticha. The two on the motorbike behind also fell off their motorbike.

Witnesses say the truck stopped 100 metres down the road. They say the driver got out of the truck to inspect the wheels. Witnesses tried to take photo of him but he got back into his truck and sped away.

Police note that the woman was wearing a bike helmet but it was no match for the weight of the truck as it ran over her.

Police are searching for the truck driver to discuss the incident with him.