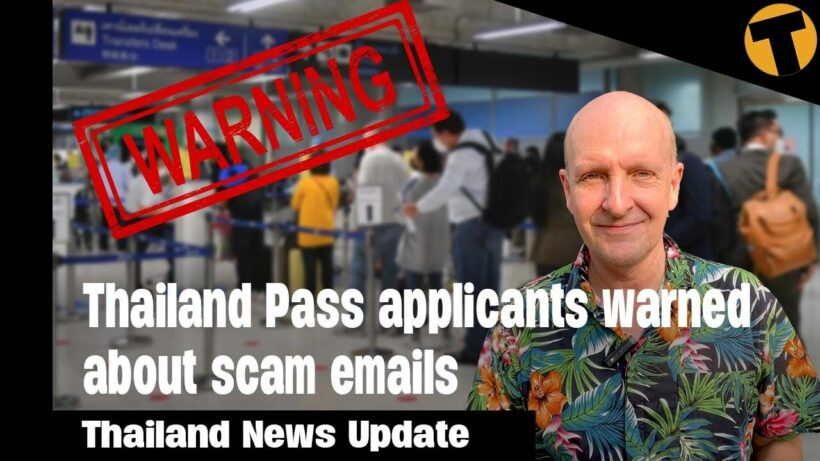 Thailand Pass applicants are being warned about numerous scam emails from accounts posing as the Department of Consular Affairs or a team from the Thailand Pass system. Some emails are requesting personal information, such as passport numbers, and others include an encrypted link. Officials haven’t confirmed if any other information besides email addresses has been compromised from the Thailand Pass system. A Thailand Pass QR Code is a requirement for those entering the country on the Test & Go or Sandbox schemes. The approval process can take a week, but while waiting to hear back, travellers are being warned about phishing emails. Authentic emails on the Thailand Pass are sent from email addresses ending in @tp.consular.go.th or @consular.go.th, which are both official accounts under the Department of Consular Affairs. A quick reminder, there is no cost for your application or confirmation of a Thailand Pass QR code.
——
Two people, including a police officer, were killed in a gunfire exchange where a suspected hitman allegedly shot at officers using an M16 rifle in the southern province of Phattalung. Another officer was severely injured but three suspects, including the alleged hitman, were able to escape. Eight police officers from the Crime Suppression Division tracked down man police say is a leading hired gunman. The man called Chui faces multiple charges involving murder and he is on a most-wanted list with a bounty of more than 100,000 baht. Officers tried to alert the vehicle to pull over, but the suspects sped off, leading to a police chase. Police say Chui fired an M16 rifle at police while officers tried to overtake them. Police Senior Sergeant Major Anan Meesang was shot in the head and later died at a hospital. Another Senior Sergeant was shot in the right arm. Chui and the other 2 suspects managed to escape from the car and flee the scene. One suspect was still in the car and police say he insisted on fighting. He was later shot to death by police. Southern police have since found the getaway car but the suspects remain at large.
—–
A speedboat tour company in Phuket is begging the government to not allow fuel prices to spike anymore. The company, Nikorn Marine Tour Phuket, offers tourists group boat trips, as well as private trips. It also offers beach parties, but its main services require boats to transport customers off Phuket. The company’s CEO says that fuel prices have already doubled. She said that if they pass on the added fuel costs it will kill their business. Boat tour companies aren’t the only groups in Thailand now being impacted by rising fuel prices. Angry truck and transport drivers threatened to camp out in front of Thailand’s energy ministry if the ministry didn’t lower prices in seven days. The Thai government has already vowed to not let the price of diesel go over 30 baht per litre. And manufacturers say they will now struggle to maintain their goods prices for the next 3-6 months unless the government continues to cap diesel prices at below 30 baht a litre. Global oil prices threaten to soar to more than US$130 a barrel.
——
Thailand’s Ministry of Foreign Affairs has approved a budget of 2 million baht to provide humanitarian assistance in Ukraine in light of the ongoing conflict which continues to cause death, injuries and damage to Ukrainian infrastructure. So far, 230 out of 256 Thai people who wish to leave Ukraine have already been evacuated. An MFA spokesperson say that the Embassy of Ukraine in Thailand made a request for humanitarian assistance. The budget will be assigned to the Royal Thai Embassy in Warsaw, Poland which will buy supplies that will be delivered to people in the affected area by the Ukrainian Red Cross and other international organisations. In 2019, Thailand donated 1 million baht in humanitarian aid and medical assistance to displaced people in eastern Ukraine.
——
New fighter jets are needed to improve Thailand’s national security and replace the current aircraft that are due to be decommissioned, according to the Royal Thai Air Force. The air force has started a 10 year plan to decommission fighter jets in 2021, cutting the fleet in half by 2032. Officers say new jets are needed for main air defence operations. The air force must also comply with the Defence Ministry’s national security and defence operation strategy, which states that the air force must keep sufficient capability in response to future threats. A more modern jet fleet is also required for the air force’s security cooperation with other countries in the region, in addition to strengthening the country’s air defence capabilities. The crash of an F-16 fighter jet on Tuesday during a training exercise is currently being investigated by an air force team. The investigation is expected to be completed within one week.
——-
International Women’s Day has sparked a network of women’s rights groups in Bangkok to call on PM Prayut Chan-o-cha to amend Thailand’s current maternity leave law. Under the current laws, women are paid for 90 days of leave. Women’s rights activists want this changed to 98 days. The spokeswoman for the Department of Labour Protection and Welfare has responded saying that the department will discuss the issue on a panel, noting that the PM supports women being equally treated and receiving benefits from employment. Under the current law, employers pay women the first 45 days of their leave, and the second 45 days are paid by the Social Security Office. The activists now want the SSO to propose a draft legal amendment. The act also protects women from being fired while they are pregnant. Thailand currently has no mandatory paternity leave in the private sector, but in the public sector, men are allowed 15 days to care for their newborn babies.