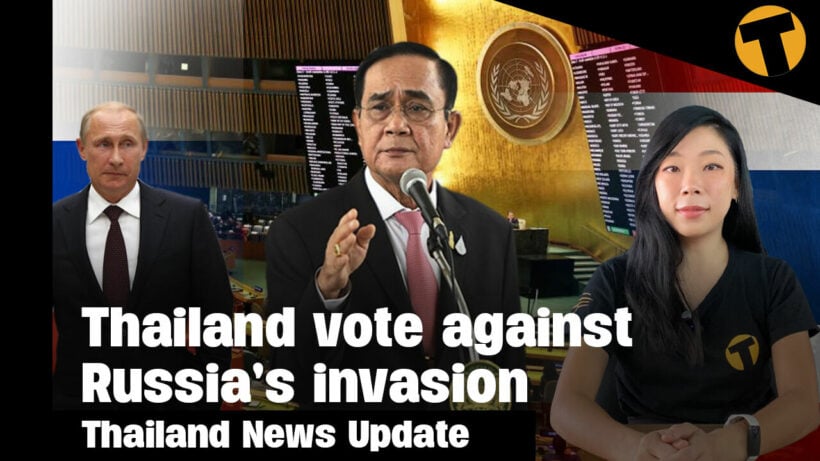 Thailand voted in support of a UN resolution against Russia’s invasion, demanding that Russia “immediately, completely and unconditionally withdraw all of its military forces” from Ukraine. A total of 141 out of the 193 member states voted for the resolution at the UN General Assembly emergency meeting at its New York headquarters.PM Prayut Chan-o-cha said in a previous statement that Thailand would remain neutral on the Russia-Ukraine conflict. And in a statement by the ambassador and permanent representative of Thailand to the UN, Suriya Chindawongse, did not mention Russia by name. He said… “Thailand is gravely concerned with the worsening hostilities and violence as a result of the use of military forces in Ukraine, which has led to the loss of life, including of innocent civilians and destruction of property and civilian infrastructure.”The UN resolution is not legally binding, but the overwhelming vote denouncing Russia’s attacks on Ukraine has been seen as historic. A total of 35 member states, including China, Cambodia, and Laos, abstained from the vote and five voted against the resolution, including Eritrea, North Korea, Syria, Belarus, and Russia.

Many Ukrainian and Russian travelers in Thailand are facing critical problems with financial transactions and their travel plans as sanctions and cancellations of flights bite around the world. Various countries are banning and blocking services by Russian banks and companies, and flights in and out of Thailand, from Russia, have reduced to a trickle… today only two flights are arriving from Russia, one from Moscow and the other from the Far East of the Siberian region.

The latest on the Tangmo story… and Police say they have now questioned eight more witnesses in the investigation into the death of TV actress Nida “Tangmo” Patcharaveerapong, who drowned in the Chao Phraya River Thursday last week after falling overboard. But police say they have yet to pinpoint whose negligence caused the actress to fall to her death. A price spokesperson says that… No theories have been ruled out so far, whether it was an accident or if there was something else behind the incident … we aim to make the investigation as thorough as possible with the help of forensic evidence. In total 29 witnesses including four of the five people who accompanied Tangmo on the boat have now been questioned, he said. The owner of the vessel and the skipper on the night have already been charged with operating an unlicensed vessel and negligence leading to death. Investigators yesterday requested information about the calls made by the five people on the boat from the Technology Crime Suppression Division, who has now been collected. Prime Minister Prayut Chan-o-cha has also urged police to speed up the investigation. The case has dominated Thai social media over the past week.

Thai and US authorities joined the mission to search for an American pilot who went missing more than 70 years ago during World War II. The pilot was flying a P-38 Lightning, a single-seated fighter aircraft, and officials suspect he went down in the northern province of Lampang. Thailand promised to help support the US mission to recover every US soldier. US Chargé d’Affaires Michael Heath said he wanted to express gratitude to the local community, authorities and government for helping to fulfill the “sacred duty and promise to the nation.”The search effort took place in an empty field near Baan Mae Kua village in the Sop Prap district. Thai media says a 98 year old woman who owns the land said an aircraft went down when she was 21 years old. A metal detector device was used to find parts of aircraft and recovered pieces were sent to the Defense Accounting Agency headquarters in Hawaii for further investigation. The soil is also being sifted to identify any human bones. Aside from the state authorities, more than 30 residents joined the search effort, which is expected to be finished by the end of the month.

Five monks who became lost in a national park two weeks ago have been found in the same park in Northern Thailand. The monks were in reasonably good health but were exhausted from eating very little food. They had been on a forest retreat and got lost while walking along paths. The monks told park officials they had come in two groups from Kanchanaburi and met at a waterfall in the Mae Wong National Park. For 15 days, the monks only ate wild bananas and plants picked along the stream. Two monks eventually found their way out of the forest to park officials. Rescue teams then started to search for the remaining three monks in the park on Tuesday this week. They were discovered in the Mae Wong district, 30-40 kilometres from the nearest community.

“Neo Pattaya” projects are in the works to develop key areas and enhance the coastal city with the goal to promote it as a top tourist destination. Pattaya businesses have been hard hit by the government’s lockdowns and business closures, especially the official ban on bars and nightlife. The “Old Town Na Klua” project will makeover the fishing community while the “Neo Koh Larn” project includes improvements to utilities, piers, waste, water consumption and treatment systems servicing the island off the coast of Pattaya. Developments to the Pattaya City Hospital are also under the budget for the “Neo Pattaya” campaign. Pattaya mayor Sonthaya Khunpluem says many of the subprojects have been listed for budget allocation, including 10 of the 14 subprojects for Old Town Na Klua.

People testing positive for Covid-19 are overwhelming Thailand’s national Covid-19 hotline with calls, despite the majority of people infected with Omicron having mild or even no symptoms at all. The National Health Security Office says there have been around 70,000 calls a day, and this is “exceeding the system capability”.The highest ever number of calls came on Tuesday this week, with 70,300 calls, and over 12,000 messages. This news comes as the CCSA is making an effort to “change people’s mindset” about Covid-19. The centre is trying to remind Thais that Covid-19 is rarely an emergency requiring doctors or hospitals anymore. The CCSA says it’s been a challenge to reassure people, particularly in rural areas where there have been little to no Covid-19 cases. The hotline had over 400 volunteers but is now trying to mobilise more.

longwood50
1 hour ago, Thaiger said: A total of 141 out of the 193 member states voted for the resolution at the UN General Assembly emergency meeting at its New York Yes and if they don't comply the next vote will…

Fundok
1. I commend Thailand for backing the UN resolution. What Russia is doing to Ukraine is despicable and its comforting to see that around 140 countries speak out loud. 2. Topic Covid hotline being overrun: "This news comes as the…