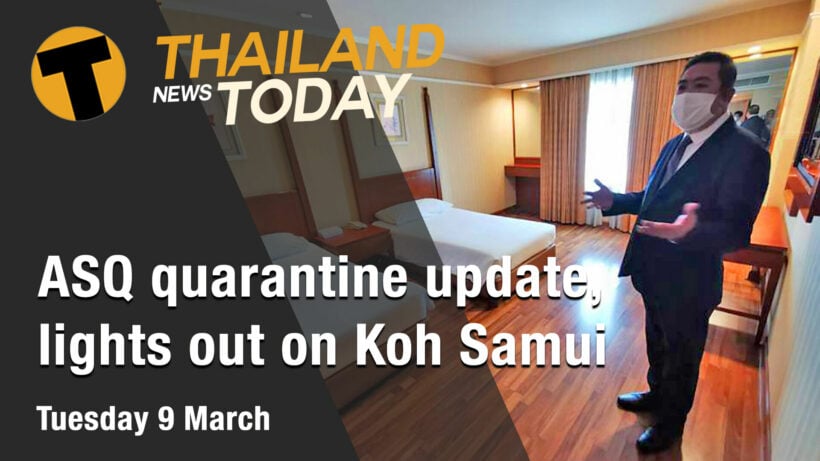 In today’s news, the government is looking to cut the quarantine time in half, more news on Thailand’s vaccine roll out, and the Thai Navy accidentally cuts off Koh Samui’s electricity supply. We’ve also got the latest information on the country’s air quality woes later in this edition.

Thailand’s Public Health Minister Anutin has announced that everyone who receives both doses of a Covid-19 vaccine will be issued with a vaccine certificate. He says the vaccine certificate will be similar to the vaccination books already in circulation for some time and used to prove inoculation against yellow fever, and similar to other similar travel documents used around parts of the world for decades. According to a Coconuts report, both the paper and online version of the certificate will cost 50 baht and will be available from hospitals administering the vaccines. Yes, you will have to pay for it.

On the vaccine front there’s quite a lot of updated news…  First, there was the unexpected arrival of the AstraZeneca vaccine on the same day Thailand took delivery of the Chinese vaccines. Then there was the announcement that PM Prayut Chan-o-cha was too old for China’s Sinovac jab and would get the AstraZeneca one instead. And then there was the delay to the PM receiving his injection, blamed on paperwork that was missing from the AstraZeneca shipment. Now, finally, the rollout of the Oxford University/AstraZeneca jab is scheduled for Thursday and the PM will be first in line.

The lights were out for the Surat Thani islands after a widespread blackout swept over Koh Samui and Koh Pha Ngan. A Thai navy ship anchor apparently was dropped on an underwater cable which supplied power to the islands in off the Surat Thani coast.

The president of the Airlines Association of Thailand says further layoffs in the sector are inevitable, due to the slow return of international tourism and a limited amount of local customers to keep the domestic carriers afloat. Puttipong Prasarttong-Osoth says the sluggish revival of foreign tourism, now not expected until the end of the year, means all carriers continue to face crippling financial hardship. And while there was a surge in the domestic market during the last quarter of 2020, the return of the virus in late December has brought demand to a grinding halt with the local carriers still limited to reduced schedules and routes.

A local politician allegedly shot 4 people at a pub in Nakhon Phanom, far north east Thailand. Witnesses told the Bangkok Post that the man started firing shots at throughout the pub because he was drunk and unhappy with the table service. Police arrested a 58 year old , who is a village kamnan.

Thailand to reduce quarantine to 7 days, meeting to confirm next Monday | VIDEO