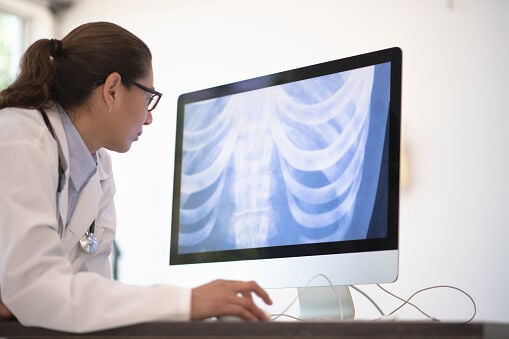 You can get a free lung X-ray scan on the first floor at CentralWorld in Bangkok until Sunday. Lung cancer is one of the leading causes of death in Thailand, so one hospital is running a campaign called “Don’t Wait, Get Checked” to try to detect lung cancer in its early stages. With the help of AI technology, you can get your results in just 3 minutes.

One person across the world is killed by lung cancer every 18 seconds. Lung cancer is notoriously difficult to detect in its early stages, according to the chief of Thailand’s Department of Medical Services Dr Somsak Akksilp. However, development of artificial intelligence – or AI – technology is increasing the accuracy of early detection.

“Lung cancer is usually detected when patients are already in the most advanced stage, or stage 4… Most lung cancer patients start seeing doctors when tumours have already metastasised and become incurable. There is a low chance of survival. Detecting lung cancer at its onset has crucial importance.”

So the development of early-diagnosis AI technology will be revolutionary, given that people go and get themselves tested.

Dr Somsak said the biggest risk factor for lung cancer is smoking, including tobacco and cigarettes. Smokers are ten times more likely to get lung cancer than non-smokers. Inhaling asbestos and pollutants such as PM2.5, benzene and formaldehyde also increase the risk of developing lung cancer.

However, lung cancer can still present itself in people who have never been exposed to the risk factors, so it is a good idea to get tested, even if you have never smoked.

You can get tested for free on the first floor at CentralWorld in Bangkok from April 22 – 24. The hospital aims to set up more mobile screening units in the future at Robinson Lat Krabang, Central Eastville, Central Ladprao, Central Pinklao and Central Rama 2.

Shade_Wilder
“Don’t wait, get checked” Kudos to the Banphaeo General Hospital for their work in this initiative; it is a good thing, period. And, may I add a 'Kudos' for the people who came up with the slogan "Don't Wait,…

Donated Covavax doses to be offered to the unvaccinated, people with allergies