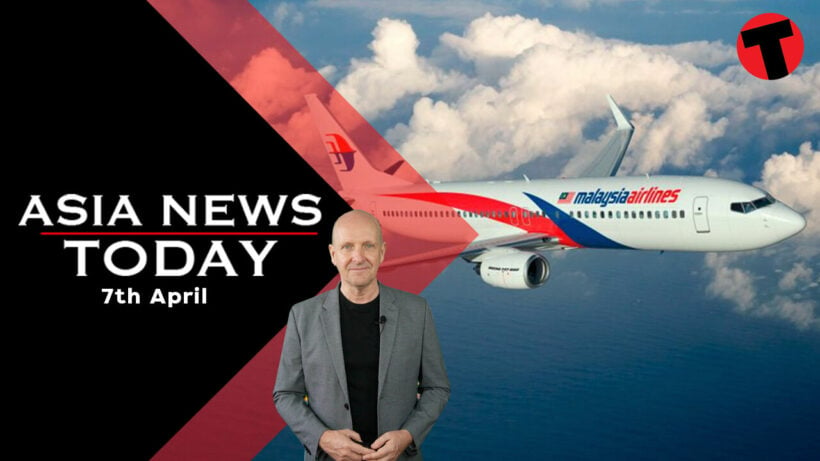 Another mid-air incident in Asia after a Malaysia Airlines flight from KL to Sabah on Borneo dipped its nose and dropped suddenly, allegedly flying erratically before turning back to Sabah. The incident happened on Sunday but has only come to light after passengers posted their stories on social media.
The airline says that Flight MH2664 from KLIA turned back due to “technical issues” with the aircraft.
The aircraft was an eight-year-old Boeing 737-800, the same type of aircraft that crashed in southern China last month, killing all 132 passengers and crew.
Passenger Halimah Nasoha posted about her experience some 30 minutes into the mid-afternoon flight, saying many passengers panicked and screamed and some were crying as the aircraft lost altitude sharply.
A flight radar tracker shows the plane dropping suddenly from 7,620 to 7,010m… a drop of 610 metres.
Website simple flying claims the drop was some 7,000 feet, a much larger drop.
She said… “It was very frightening for many of us. I felt like I was going to die”.
She “went on… “The flight was unstable. It went up and then went down. But, the first time it went downwards was the worst”.
Passengers claim the terror lasted for about 10 minutes as the plane flew erratically.
The Civil Aviation Authority of Malaysia says they’ll be examining the plane’s internal Flight Data Monitoring System, but indicate the pilots appear to have responded correctly.

The Indonesian government launched a legal suit against Thailand’s PTT Exploration & Production petrochemical company for alleged economic and environmental damages suffered by local people around Kupang, in Indonesia’s far southeast, following the 2009 Montara oil spill.
The oil spill followed an explosion and uncontrollable oil spill in the Timor Sea, off the northern coast of Western Australia, lasting 74 days, until emergency responders drilled a new that stopped the leak. The Thailand oil company operated the Montara field in Australian waters at the time of the incident.
PTT Exploration & Production is set to pay compensation to Indonesian seaweed farmers…. the total bill could top more than US$262 million.

Philippine presidential candidate Ferdinand Marcos Jr has retained a clear lead in the latest polls for a new Filipino president, though his lead has narrowed after the current Vice President Leni Robredo picked up support. The election for a new President, who will take over from Rodrigo Duterte, is on May 9. Backing for Marcos, the son of the country’s late dictator, Ferdinand Marcos, dropped slightly to 56%, down about 4% compared to polls in January and February, while Robredo’s support grew to 24% from 15% the month before. But still a substantial margin in favour of the former dictator’s son. Other candidates polled a mere 8%, 6% and 2%, respectively… they may as well pack up and go home if the polls are any indication. Meanwhile, Marcos’s running mate, Sara-Duterte Carpio, the daughter of incumbent President Rodrigo Duterte, remains the top choice for vice president with 56%, again the way in front of the other candidates. In the Philippines, the president and vice president are elected separately.

A former Indonesian human rights lawyer who was part of an Islamic hard-line group has been sentenced to three years in prison after he was convicted of incitement with the aim to establish a caliphate in a secular country.

The three-judge panel found the 53 year old man guilty of hiding information from authorities about militants pledging allegiance to the Islamic State group back in 2015 and “giving a speech inciting people to carry out terrorist acts.”

During the sentencing the presiding judge said… “The defendant does not support the government’s program in eradicating terrorism.”

The man was the general secretary of the now-banned Islam Defenders Front, which has a long record of vandalising nightspots, hurling stones at Western embassies and attacking rival religious groups. The groups demanded Islamic Shariah law apply to Indonesia’s 230 million Muslims.

He was arrested in April 2021 after police interrogated scores of suspected militants following the Palm Sunday bombing outside a Roman Catholic cathedral in March last year, that killed two suicide attackers and wounded 20 innocent people.

The judges ordered the time he had already served to be deducted from his sentence.

Japan is set to “lift the entry ban on 106 countries”. That was the news from the Japanese government, but it caused confusion on local social media and gave false hope that tourists would soon be allowed into the country.

In fact, there will be no change to the current situation.

A Japanese ministry official tried to clarify the announcement yesterday, saying… “In reality, there will be no change to who can enter Japan. There won’t be anyone new who will be able to enter Japan as a result of this change.”

Foreign students, researchers and business travellers who have been allowed into Japan since March 1 will continue to be able to enter the country, but all foreign tourists remain barred from entering Japan at this time.

According to the official, the latest revision was based on the Japanese Foreign Ministry lowering the alert level of those 106 countries at the start of April. But since the Foreign Ministry is still limiting the issuance of visas at embassies overseas, Japan will continue to restrict who can enter the country.

So don’t book your tickets to go and see the blossoms just yet.

What do Thais of different ages think of Russia’s invasion of Ukraine?