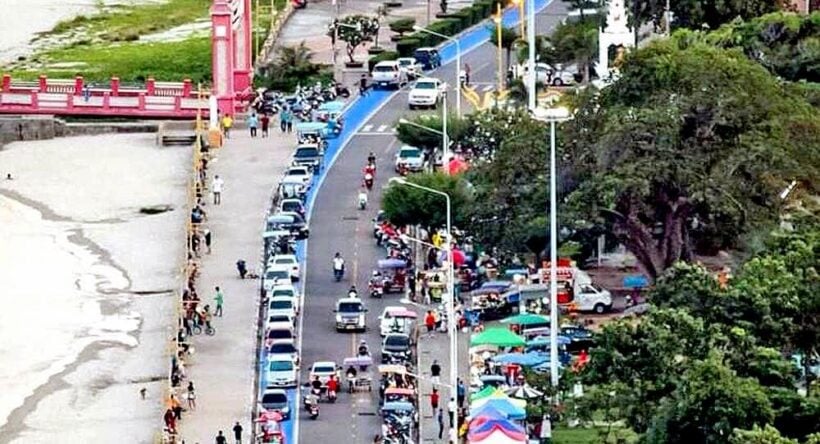 Bike lanes are being added in popular locations around the country, at great expense, for the pleasure and safety of the growing number of bicyclists in Thailand. But sometimes no one tells the car drivers who think the new bike lanes are just a colorful place to park their cars.

A 9.6 million baht, 2.9 kilometre long bicycle lane along the beach in Prachuap Khiri Khan’s Mueang district has ended up as parking spaces for car, with police saying nothing can be done about it.

Following complaints from local residents that they can’t use the new bike lane, Mueang Prachuap Khiri Khan police station chief Pol Colonel Chayinthorn Sukhonthorn says no action could be taken against motorists who parked in the lane.

He explained that the provincial public works and town planning office had built the bike lane without cooperating with the local administration to issue any law or regulation for its usage, so police could not act against motorists that parked there.

The lane was allocated for cyclists from the beach road in front of Wing 5 Air Command to the Bang Nang Rom Bridge.

Police say they will hold a meeting with other government agencies concerned to discuss what should be done about the bike lane.

Sutthiporn Thiangtham, the mayor of Mueang Prachuap Khiri Khan municipality, said the municipality had not taken over the bike lane from the public works office even though the construction work had been completed six months ago.

Parts of the lane’s surface have also been damaged by vehicles, the mayor added.

Aran Chanton, acting chief of the Prachuap Khiri Khan Public Works and Town and Planning Office, said the bike-lane project could not yet be handed over to the local administration because the office was currently in the process of defending the project with the Office of the Auditor-General.

Aran said the agency had questioned the project’s worthiness after it turned out that it had not been used by cyclists but was mostly being used as parking space by motorists.