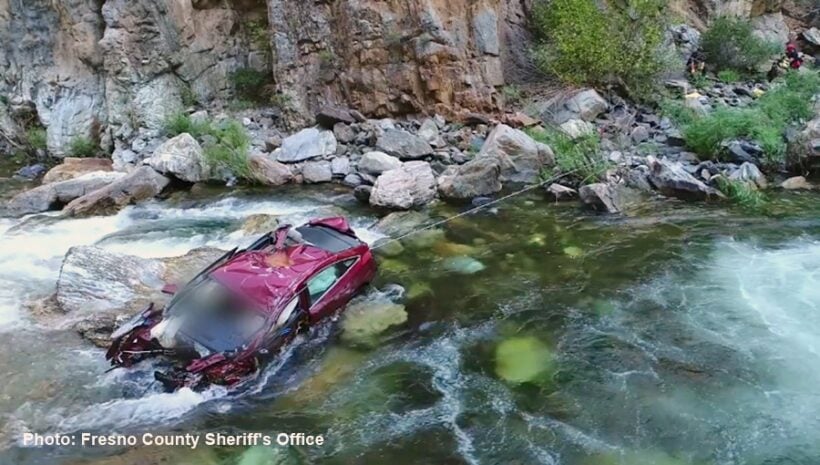 Fresno County has released video clip of the September 1 operation to retrieve bodies of two Thai students who died in a road accident at the King River in California.

The 5 minute video shows different stages of the recovery operation conducted by the Fresno County Sheriff’s Search and Rescue team.

They say it took a total of eight hours to successfully move the car and remove the two bodies. The victims were later identified to be 28 year old Pakapol Bhakapon Chairatnathrongporn and 24 year old Thiwadee Saengsuriyarit.

The two were driving on a highway on July 26 to Kings Canyon National Park when their rental car plunged off a 150-metre cliff and came to rest partially submerged in a river.

Read more about this story HERE.

This video shows different stages of the recovery operation conducted by the Fresno County Sheriff's Search and Rescue (SAR) team in the Kings River on September 1, 2017. It took a total of eight hours for SAR and the California Highway Patrol's Air Support Unit to successfully move the car and remove two bodies from it. The victms were later identified to be Pakapol Bhakapon Chairatnathrongporn, 28, of Thailand and Thiwadee Saengsuriyarit, 24, of Thailand.This is a summary of the operation. One of our SAR deputies made his way out to the car and secured it by attaching a cable to the car from a device called a Griphoist, which is basically a manual winch system. Deputies on the side of the river tethered the Griphoist to a rock and then slowly ratcheted it, pulling it a short distance into slower moving water. This made conditions much safer for deputies to access the car. The team then used tools to get inside the car and were able to free both bodies. Deputies hoisted each body up to the crew aboard H40 and they flew the bodies to the road side where a coroner transportation unit was stationed. Family members have since taken possession of the bodies and held memorial services.

Sai Yuan crash – a flipped car and one motorcyclist injured