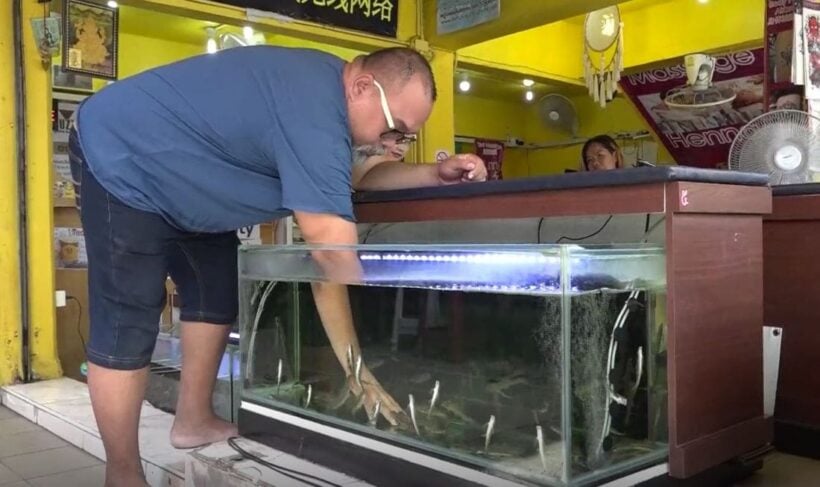 Sometimes you have to go the extra distance to prove your point. Like putting your head in a fish spa.

Sanook reports that a Thai owner of hundreds of fish spas around the country has made hi point about an Australian woman and the foreign media for discrediting his business.

The actions of Chaiyaporn Lojaya follow the Australian’s claim in UK media that she lost her toes due to an infection she picked up in Thailand at one of his fish spas.

To prove that his spas are clean he has plunged his head into a tank of the small nibbling fish normally reserved for tourists’ feet.

A woman’s indulgent Thai holiday spa turned into a living nightmare when an infected fish tank led to all five toes being amputated on her right foot. Property manager Victoria Curthoys, 29, initially received an infection in her big toe after treading on glass, resulting in doctors amputating half of her toe to kill the infection – The Sun

You can watch the man making his point, head first, HERE.

The incident allegedly happened eight years ago. Chaiyaporn, the owner of Bangkok Dr Fish Spa 99 that has 300 branches throughout Thailand, did his PR stunt at his Chiang Mai Night Bazaar location.

He slammed the foreign media and the woman for having a go at Thailand. He claims his spas are sanitary, properly run and have the necessary public health licenses. But Chaiyaporn says that any economic impact on his business would only be temporary.

No reports if the fish complained that a man plunged his head into their home.

You can read the report from the Perth woman HERE.