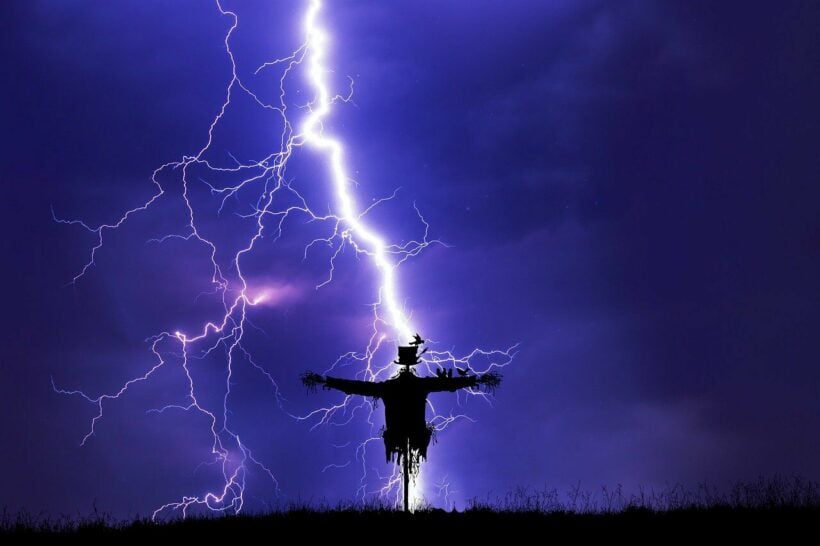 PHOTO: A Farmer was killed by a lightning strike in his rice field. (via Pixabay)

An unfortunate farmer seems to have been killed by a lightning bolt in his rice field in the Phon Sawan district of Nakhon Phanom. His wife found his body on Monday afternoon in a condition described as unconscious and burned. Kamol Praking was 49 years old and lived and farmed near Huay Hai Village.

After calling for emergency help, medics, rescue workers, and police arrived at the farm to find his body lying flat on his back with electrical burn markings all over it, consistent with being killed by lightning. According to his wife’s statement to the police, the man was ploughing the fields in preparation to sow the area with rice seeds as the daily rain has made the land fertile and ready for growing.

Heavy rains and turbulent weather have been common in the area recently and many parts of Thailand had suffered from severe thunderstorms and high winds in advance of the nearing wet season. Powerful storms had damaged nearly 100 homes in the nearby districts of That Phanom and Pla Pak last week.

Kamol had been ploughing on a tractor just before the lightning killed him, but his body was found away from it near a farm hut. The man was dressed in simple farm clothing and he was not wearing anything made of metal, not even a watch, that might have attracted the lightning bolt.

His wife heard a huge thunderclap and a loud bang come from the field though she did not investigate immediately. But after 2 hours, when her husband still had not returned, she went to go check it out. That was when she found her husband lying unconscious in the field. Her first call was to neighbours for immediate help and then she alerted the police. The man was pronounced dead on the scene.

The chances of being hit or killed by lightning are estimated to be about 1 in 500,000.