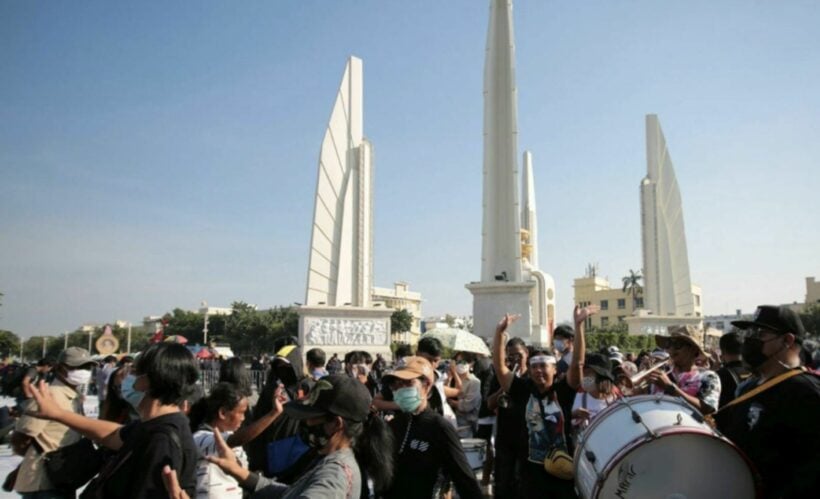 In a peaceful but controversial gesture, protesters yesterday turned their backs on the royal motorcade as it carried the Thai King and Queen to the opening of a new railway line. As their backs were facing the passing cars, the mostly young Thai protesters raised their hands with the 3 finger salute and sang the Thai national anthem. The symbolic gesture would have been clearly noted by the occupants of the yellow Rolls Royce.

Later, the protesters also wrapped the Democracy Monument with a banner which was covered in messages outlining their key demands.

There was an assembled 5,000-strong police and security force. The numbers were bolstered with border patrol, plainclothes and female police officers. They were un-armed but carried batons and riot gear.

The water cannons were also on standby, and had their tanks filled up in front of the government House – filled up in clear view, probably more of a threat than in intention to really use them again. Protesters complained that the blue-dyed water used at the Pathumwan Intersection in central Bangkok on October 16 had been also laced with a chemical irritant. The Bangkok Police Chief denied the claims at the time, but police later admitted to in front of a parliamentary committee that the water had contained tear gas.

The sub-groups of the larger Free Youth Movement – the Bad Students, Mob Fest and Free Women, and a smattering of other protest groups including LGBT and sex-worker organisations – had provided authorities with a full program of their planned events in advance to yesterday’s gatherings.

‘Bad Students’ have been pushing for reform in the Thai education system, changes to the dress codes and haircut rules for students, the resignation of the Education Minister and a call for greater scrutiny of sexual abuse and harassment cases at schools. They kicked off the day’s protests at the Education Ministry at midday. The gates were locked but the students partied out the front with music, dancing and a ceremonial display of a mock cremation of a portrait of the Education Minister Nataphol Teepsuwan at a rally in 2014 when he was a leader in the People’s Democratic Reform Committee movement, aka. ‘yellow shirts’.

The rally then marched to the Democracy Monument to join in the larger Mob Fest rally at the symbolic monument in Ratchadamnoen Avenue. They paraded a huge 35 square metre banner, carrying it over their heads and passing it down the line. It was covered in messages – the consistent messages by all protest groups – the resignation of the Thai PM, reform of the 2017 Thai Charter and reforms of the monarchy, to bring the role under the country’s constitution.

The smaller rallies all met at the monument at 2pm. To counter accusations from authorities that the rallies were losing popularity and the numbers were dropping, the organisers asked attendees to drop a 1 baht coin into a box so they could report the numbers to officials after the event. Probably not particularly accurate but more symbolic. The protesters then joined in the symbolic wrapping of the Democracy Monument with the huge banner they had been carrying earlier.

In the middle of the afternoon the King and Queen passed by on their way to the Sanam Chai MRT for the official opening of the Blue Line extension. The new station is quite near the Grand Palace. Their Majesties took a ride on the new line from the Sanam Chai to Lak Song stations, covering a distance of 11kilometres. Thousands of yellow-clad well-wishers turned up to greet them along the route including some rent-a-crowd supporters bussed in from other provinces. 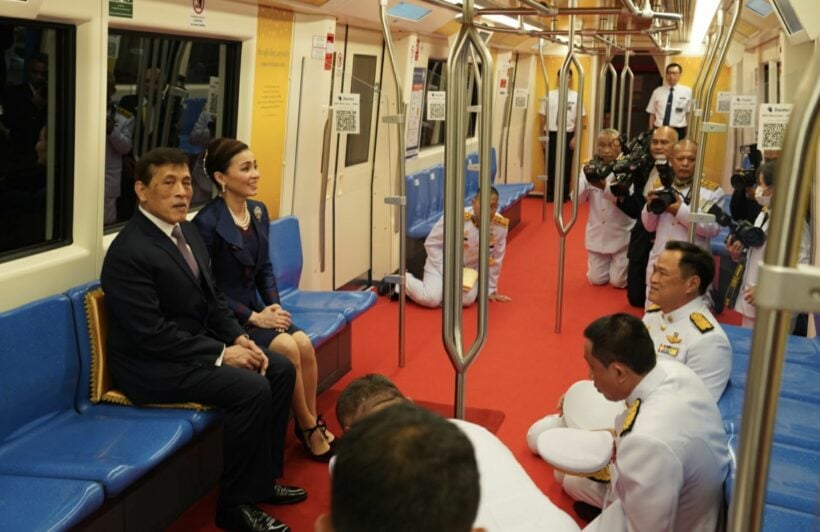 Officials from the State Railway of Thailand have signed 5 high-speed rail contracts worth more than 40 billion baht, in the latest development in the Thailand – China rail connection. It’s understood the contracts cover phase 1 of the railway, from Bangkok to the north-eastern city of Nakhon Ratchasima (Korat).

It’s hoped that section will carry its first passengers in 2023 and that the line will eventually reach further north, to Nong Khai, and from there, link with a rail connection connecting Laos and China. The high-speed trains will run at speeds up to 250 kilometres an hour.

Nation Thailand reports that the contract signing took place at the Transport Ministry, between SRT governor Nirut Maneephan and the 5 contractors, Nawarat Patanakarn, Thai Engineer Industry, Italian – Thai Development, SPTK Joint Venture, and Civil Engineering. In total, the project will involve over 100 kilometres of railway, with a budget of 40.275 billion baht. The first phase of construction involves 14 contracts, with work under the first one completed and ongoing under the second.

Nirut say the 5 new contractors are expected to take delivery of the land in early 2021, with the 7 remaining contracts being signed next year.

Officials in Bangkok have decided to delay a proposed ban on 10 wheel trucks in light of the current economic challenges affecting the transportation and industrial sectors. The proposed ban was aimed at reducing PM2.5 air pollution in the capital and was expected to come into force from December 1 – 28.

PM2.5 refers to particulate matter (solid and liquid particles) with a diameter of less than 2.5 micrometres that remain suspended in the air for longer. They can be the result of burning fuel and are the primary cause of smog.

Commenting on the decision to delay the ban indefinitely, Deputy National Police chief Damrongsak Kittipraphas says the relevant authorities agreed the timing is not right.

“The police have discussed with related agencies, including the Department of Industrial Promotion, Pollution Control Department, the Thai Chamber of Commerce and the Public Transport Association, and agreed to postpone the rule indefinitely. The members at the meeting were concerned that the rule could obstruct the operation of the industrial and transportation sectors that are starting to recover from the economic contraction. Therefore, the related agencies promised to study the issue thoroughly, as well as explore other options to prevent and reduce PM2.5 air pollution in Bangkok.”

However, Damrongsak says that from December 1, authorities in the capital will be clamping down on large polluting vehicles, adding that those emitting clouds of black smoke are one of the biggest contributors to air pollution.

“We will send officers to perform random checks at bus terminals and truck operation centres. The inspection will be recorded via video camera to ensure transparency of police work.”

Thai authorities are transferring 3 Iranian inmates to Tehran. The inmates were involved in the 2012 failed bomb plot, which Israeli and Thai officials say, was targeted at Israeli diplomats in Bangkok.

According to Iranian state TV, the transfer was a swap. The report says 33 year old British-Australian Kylie Moore-Gilbert, who was incarcerated for the past 2 years on espionage charges, was released from Iran prison in exchange for the 3 Iranians imprisoned overseas.

Although Iranian media reports the transfer was a prisoner swap, Thai officials have not confirmed the reports. Thailand’s deputy general Chatchom Akapin says the transfers are normal and Thailand approved the transfer in an agreement with Iran.

“These types of transfers aren’t unusual… We transfer prisoners to other countries and at the same time receive Thais back under this type of agreement all the time.”

Back in 2012, a cache of homemade explosives accidentally blew up at a Bangkok villa on Sukhumvit 71 rented by the Iranians. Saeid Moradi fled the home carrying explosives, but dropped them as police chased him. He lost both his legs in the explosion.

While both Thai and Israeli officials say the explosives were intended to attack Israeli diplomats in Bangkok, Iran officials deny the allegations. The men never faced terrorism charges or any charges relating to attempting to kill the Israeli diplomats.

Moradi along with his accomplice, Mohammad Kharzei, were convicted in 2013. Thai Court sentenced Moradi to life in prison for attempting to murder a police officer and sentenced Kharzei to 15 years in prison for possessing explosives. Another suspect, Masoud Sedaghatzadeh, was arrested in Malaysia in 2012 and then extradited to Thailand in 2017.