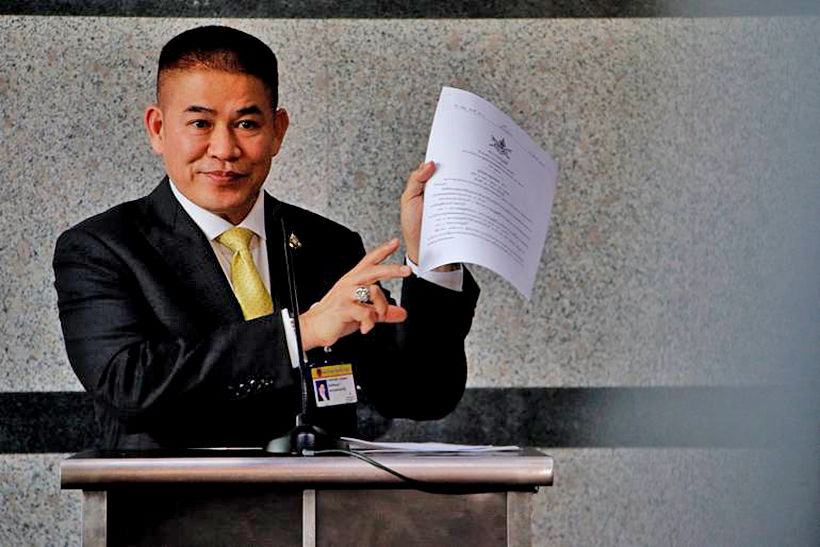 “Wissanu refused to give a direct answer to a reporter’s question about whether Thammanat would still be considered qualified if the higher-level degrees were proven to be fake.”

Key leaders of the coalition continue to back the embattled deputy agriculture minister Thammanat Prompao despite a week were his drug past has been revealed in a Sydney Morning Herald exposé and his educational credentials have also been brought into question.

Deputy PM Wissanu Krea-ngarm even made the astonishing statement on Friday that, even if Thammanat Prompao’s doctorate degree from a university in California was a fake, it does not disqualify him from being a cabinet minister.

Citing a provision in Constitution, regarding the required qualifications of a minister, he explained that a proposed cabinet member must have graduated with a Bachelor’s degree in any field.

“When the Constitution only requires a Bachelor’s degree, they just authenticate his BA degree and didn’t bother with his MA or doctorate degrees, and that was enough,” said the deputy PM.

Wissanu refused, however, to give a direct answer to a reporter’s question about whether Thammanat would still be considered qualified if the higher-level degrees were proven to be fake.

“Do not mix up the 2-3 issues. If it started with the issue of qualification, it must stick with that issue.  When the qualifications requirements are met, it is OK and there is no need for interpretation. If, however, someone told you that you are not honest or your ethical conduct is substandard, this will have to be proven,” said Wissanu.

Thammanat Prompao was revealed last Monday to have spent four years in a Sydney jail after an Australian court sentenced his to six years over heroin trafficking offences. He has also changed his name four times.

When he was jailed in Sydney, Thammanat went by the name of Manat Bophlom. Before that, by his own admission, he had been known as Yutthaphum Bophlom. When deported from Australia, he changed his name to Patchara Prompow. Later, he changed it to Thammanat Prompow.

Apart from the deputy PM Wissanu, the PM Prayut has also given his support to Thammanat, along with government patriarch and staunch Prayut loyalist Prawit Wongsuwan.

Thammanat is now threatening to sue his accusers and the Sydney Morning Herald.