The Thai deputy agriculture minister Thammanat Prompao has re-ignited the controversy over his drug convictions in Australia by continuing to insist he “never pled guilty or served jail time for drug charges in Australia”. His claims are contrary to the evidence provided by the Australian courts.

The ministers’s denial follows the disbanded Future Forward Party publishing an Australian court ruling on its Twitter account. The tweet confirmed Thammanat’s guilty plea and jail sentence for heroin trafficking back in 1995.

The tweet read… “Whoops! Dropped some files. Giving out files of evidence to rip off Thammanat’s mask, who lacks the qualifications of being an MP.”

Khaosod English reports that, under Thai laws, a person convicted for drug offences cannot serve as a minister in the Thai government.

Responding to questions in Parliament, Thammanat said…. “I did not admit to importing, exporting, producing, or selling heroin.”

But the Twitter account from the disbanded party responded with links to a folder of evidence the party said it received from Australian authorities. The tweet has been retweeted nearly 70,000 times. The files, including court records in English, Thai translations, news clippings, and a Powerpoint presentation.

According to the court documents, Minister Thammarat, then under the name of Manat Bophlom, was one of two Thai men who “pleaded guilty to being knowingly concerned in the importation of heroin” and were sentenced to prison for six years in 1995.

The opposition claim Thammanat’s criminal records effectively barred him from serving in the Thai Cabinet, but the politician vehemently denied the allegations in spite of the documented evidence.

The revelations originally came to light when the Australian Sydney Morning Herald, an award-winning newspaper recognised for its excellent journalism, published an article outing the Thai minister and the train of events that lead to his heroin convictions. You can read the original SMH article HERE.

Speaking almost an hour at the censure debate Thursday, Thammanat continually repeated his denial and accused the Future Forward of misleading translation.

“I thought it’s going to be something exciting, but I’ve seen it all. Your translation which says that I had confessed to trafficking charges is not true because there is nowhere in a certified translation that says I did.”

“That charge only carries a life sentence, so if I had been sentenced as the debater says, I must have died and reborn again.”

Putting the motion of no-confidence against him was Future Forward MP Theeratchai Pantumas, who said Thammanat was “concealing and twisting the truth in a world-class humiliating affair.”

Phalang Pracharath MPs also objected to the documents being aired inside the Parliament.

Thammanat, who entered politics as a Phayao MP, said he had already gone through the vetting process and maintained that his eligibility is not affected since he is not being prosecuted by the Thai judiciary.

“Thailand was never a colony. The debater is speaking as if we are surrendering our sovereignty to Australia. The reference to a court order from another country is not applicable to the Thai government.”

• The embattled minister threatened to sue more than 100 media outlets last year for mentioning or reposting the Sydney Morning Herald story. Read about that HERE.

• The new government coalition considered demoting the Agriculture Minister over the allegations, HERE.

SOURCE for this story: Khaosod English 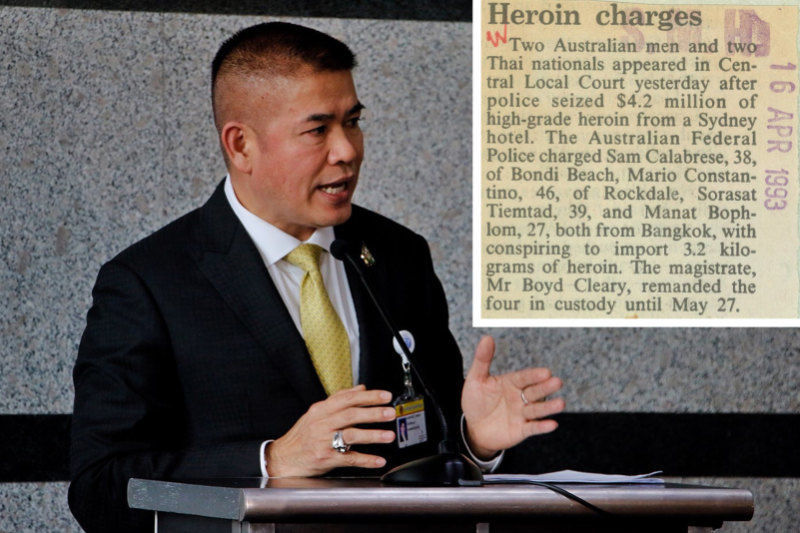