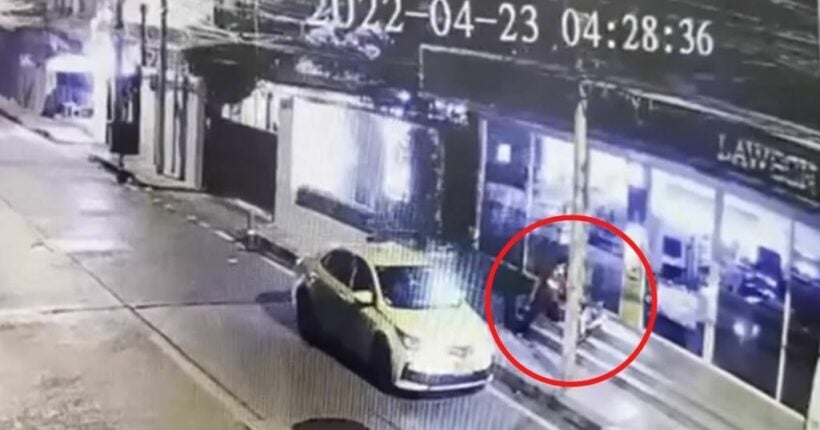 Following the report of a drunken foreigner who got robbed by a taxi driver while sleeping on the sidewalk in Bangkok, police have already arrested the suspect. The taxi driver said he meant to just wake the foreigner up, but the man’s assets ‘enticed’ him.

Last Sunday, a local Thai news Facebook page reported that a taxi driver had robbed a drunken foreigner who was sleeping in front of a convenience store. His gold necklace, cash, passport and other important documents were all stolen. CCTV footage showed a taxi driver parked his car beside the foreigner, stole his assets and fled, leaving him lying on the ground.

The foreign victim was later reported to be a 32 year old Frenchman who works at an IT company in Bangkok. He filed a complaint to the police saying he lost assets worth about 54,200 baht in front of a Lawson’s convenience store on Soi Sukhumvit 22.

On Thursday, officers from Thong Lor Police Station investigated the scene of the incident. They were able to track down and arrest the 49 year old taxi driver in front of a hotel in Bangkok. The police seized the wallet and mobile phone as evidence from a shop where the suspect had sold it. The suspect told police that he meant to wake the foreign man up and aimed to offer him his taxi service. He said the assets were too enticing, so he decided to steal them.

The taxi driver was charged with committing a nighttime robbery by using a vehicle to assist his escape. The police also revealed the driver had a criminal history, saying he had previously been charged in drug cases in 2012 and 2015.

palooka
9 minutes ago, BBY said: If this is the case, it’s a very dangerous practice. The Police should undertake road checks at night and if the registered user is not the driver. Then seize the car and crush it. That…
Fanta
13 minutes ago, palooka said: The taxi driver was charged with committing a nighttime robbery Must be a difference to a day time robbery. It is. Harsher punishment for night time crimes. Seriously. I don’t know why but that’a the law. Maybe…
Ramanathan.P
5 hours ago, Noble_Design said: I believe he rented the taxi from the original permit holder. Usually the permit holder/taxi owner will operate the taxi during day time. Once he retires for the day he will then rent his taxi…
HiuMak
Stupid French tourist. CCTV everywhere now...think before doing something you are not supposed to do

Bluesofa
21 hours ago, Ramanathan.P said: I wonder how those with criminal records be given permit to operate taxi? Don't they have any system of checking and verification in renewing his taxi permit? Isn't it called a 500 Baht note? <For…