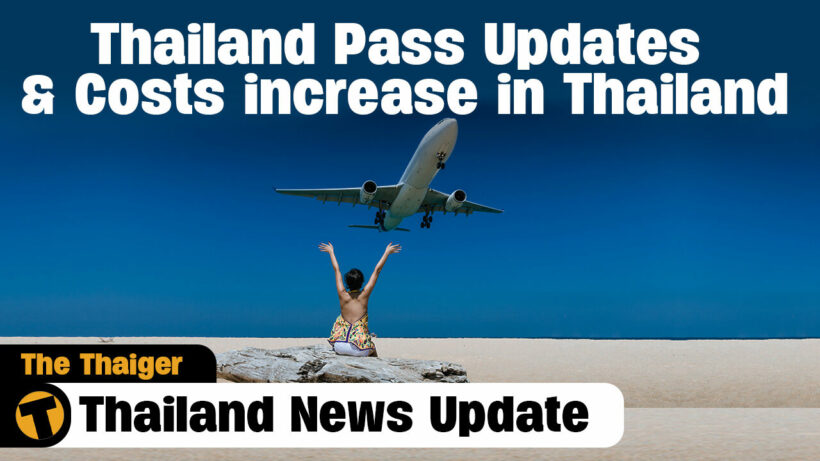 The updated Thailand Pass online registration system is now accepting applications for the new test-free entry. It opened just after midnight, today. From 1st May 2022, travellers arriving in Thailand by air will be subject to much-simplified entry measures…

Fully Vaccinated Travellers only need to upload the following documents:

Proof of the 10,000 dollar insurance AND

A Negative PCR Test taken within 72 hours of departure.

If the unvaccinated traveller cannot provide a Negative PCR test, they will have to do the 5 Day alternative quarantine. And land border checkpoints in 17 border provinces will reopen from this Sunday. Officials have agreed to reopen 31 permanent land border checkpoints in 17 provinces. To enter Thailand by land, vaccinated Thai citizens and travellers from neighboring countries, including Laos, Cambodia, Myanmar, and Malaysia, can enter without the need to submit Covid-19 tests or insurance. But foreigners who want to enter Thailand by land are still required to pre-register through the Thailand Pass and purchase insurance that covers at least US$10,000. Unvaccinated travellers may enter via land, but will be required to provide a negative PCR test result taken within 72 hours prior to entering the kingdom. So the procedure is much the same as travellers arriving by air. There’s a full list of the checkpoints reopening on May 1 at thethaiger.com

A 42 year old woman has drowned in Bangkok’s Chao Phraya River yesterday. The woman was washing her clothes on the riverbank in the Phra Pradaeng District in Samut Prakan province, between Bangkok and the mouth of the river, when she fell into the water. Around 12:30 yesterday, officers from the local Police Station received a report of a woman falling into the River. When they arrived, there was just a pile of clothes and sheets left on the banks. A team of divers were able to retrieve her body from the river. The deceased was identified as 42 year old ‘Waraporn’, a homeless woman who was living in the park just in front of Phra Pradaeng Police Station. Her body was taken by a rescue team to hospital for an autopsy.

A sign of the times… a well-known noodle shop named Look Chin Pla Ban Tad Thong in Bangkok has temporarily closed after being open for 80 years. The owners told customers… we’ve had to close all branches temporarily. We have never seen ingredients this expensive before. Since the pandemic hit, many businesses have had to close down. Originally because of lockdowns and curfews. Now all the customers are back but inflation is killing their businesses which rely on stable, low pricing. The owner told Thai media that both inflation and a lack of tourists, Thai or foreign, is making their business impossible at this time. They say they are going to keep all their shops closed temporarily until the situation stabilizes… to protect their investment. They’d calculated that the cost of ingredients surged 50% since Songkran.

And another inflation indicator in Thailand, the unofficial food staple… the humble Mama noodles. The cost of a packet has been an affordable 6 baht per packet since 2014. However, Mama’s manufacturer, Thai President Foods, says they plan to increase the price of their instant noodles next month to compensate for rising costs of transport and raw materials. Thailand’s Minister of Commerce said he will try to delay the price increase of the “important products” for as long as possible. They say the cost of the main ingredients, wheat flour and palm oil ,are the reason they need to increase their prices. Whilst the proposed increase is only 1 baht, to 7 baht per packet, it still represents a 16% increase.

After Sri Lanka declared a state of emergency earlier this month, the country has seen massive political unrest as protestors call on the president and his powerful family to step down. Last week, Sri Lankan police shot and killed one protestor in an incident that quickly spread across social media. Yesterday workers participated in mass walkouts. The protesters included teachers, bank employees, and train drivers, all marching to the president’s office, and thousands of people went out in the streets across Sri Lanka. This follows skyrocketing prices in the country, power blackouts and a lack of fuel. Sri Lanka’s president says he is willing to form an interim government with a new PM and cabinet. But the Prime Minister, who is the President’s older brother, has declined to step down.

The Chinese megacity of Guangzhou has cancelled hundreds of flights yesterday and launched mass testing of 5.6 million people after a single Covid-19 case, as the battle to maintain China’s zero Covid policy sweeps across the country. China is facing its worst outbreak since the peak of the first wave in early 2020, with eastern Shanghai recording dozens of daily deaths and capital Beijing sealing off whole neighbourhoods where mere handfuls of cases have been detected. Under its zero-Covid-19 policy, China has used lockdowns, mass testing and travel restrictions to brutally stamp out infections. But now the strategy is under strain, with the highly transmissible Omicron variant punching through health controls. It is estimated that some 165 million people are now directly affected by the country’s current lockdowns.

An old, earthquake-damaged bridge has collapsed under heavy traffic in a central Philippine town, sending about a dozen vehicles plummeting into the river below, killing at least 4 people,. An Austrian tourist is among the dead, and at least 23 others including his wife were injured in the bridge’s collapse on Wednesday afternoon on Bohol in the central Philippines. Police report that an initial investigation showed the bridge gave way under the weight of vehicles stuck in a traffic jam on it, including a truck loaded with sand and gravel to be used in the construction of a nearby bridge.

Ramanathan.P
Land crossing is still not clear. This is what I found at the Thailand Pass website just now. I rather wait for all the restrictions to be dropped completely before crossing over... https://land.tp.consular.go.th/home From 1 May 2022, travelers entering…
pascal
well applying is straightforward and easy , did it this afternoon received my QR code few hours after . i am good to go and to get in without any problems. i guess the most important was to get all…