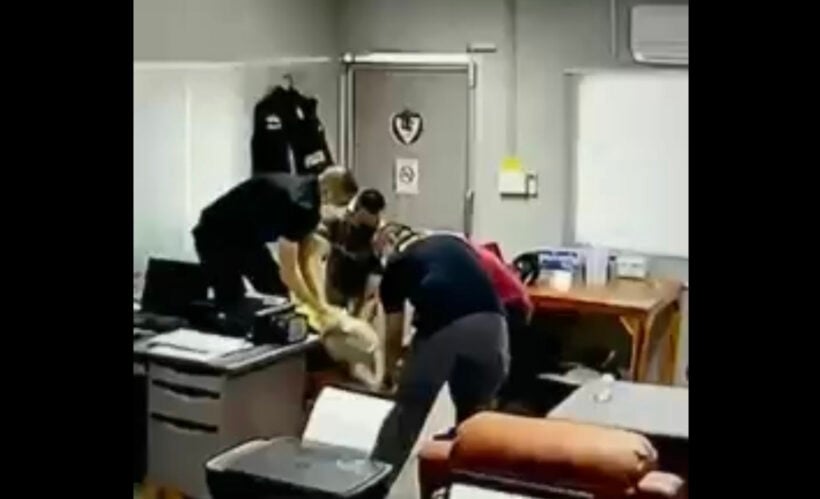 Thai police have hit back at unsubstantiated rumours of the death of a police officer who leaked footage of a suspect allegedly being killed in custody. National police spokesperson Yingyong Thepjamnong has described the claims as, “fake news” and warned that those behind them could face prosecution under the Computer Crime Act.

Claims that a junior officer named as Tossaporn Kaewkoed had been found drowned first surfaced on a website and have been widely shared on social media. The posts claim that Tossaporn was the officer who leaked the video footage that implicated Thitisan Utthanaphol in the death by suffocation of a drugs suspect under interrogation.

However, according to a Coconuts report, Yingyong says there is no such officer and those spreading the rumours could face up to 5 years in prison for violating the Computer Crime Act.

The nation is up in arms over video footage that appears to show Thitisan placing up to 6 plastic bags over Jeerapong Thanapat’s head, at a police station in the northern province of Nakhon Sawan. The suspect can be seen resisting before falling unconscious. While police initially suggested the 24 year old died of a drug overdose, an autopsy has confirmed he died of suffocation.

It is not known who leaked the video footage, but widespread suspicion over corruption in the Royal Thai Police has led some to express doubt that Thitisan will face any real consequences over the alleged murder. The former police chief, who has now been dismissed from the force, has amassed substantial wealth and appears to be well-connected. His powerful status has also given rise to concerns for the welfare of the officer who leaked the video footage.

The government agency, Anti-Fake News Centre Thailand, has also dismissed rumours of the officer’s mysterious demise and warned the public to stop sharing the story.

Rain
Ahh... Enjoy a good Thai conspiratorial cover up and the rhetoric that accompanies.
HolyCowCm
23 minutes ago, Bluesofa said: He's alive Jim, but not as we know it. He breaking up captain.

Golden-Triangle
General question for the great unwashed ( me included, no discrimination here ) would a new/ different/ more democratic government get rid of the all invasive Computer Crimes Act ?? Discuss 😎
Jannot
I am confused,,, has any officer been found dead who may or may not be connected to this situation...

gummy
2 hours ago, Jannot said: I am confused,,, has any officer been found dead who may or may not be connected to this situation...  Possibly best not to say in case you end up dead 😂