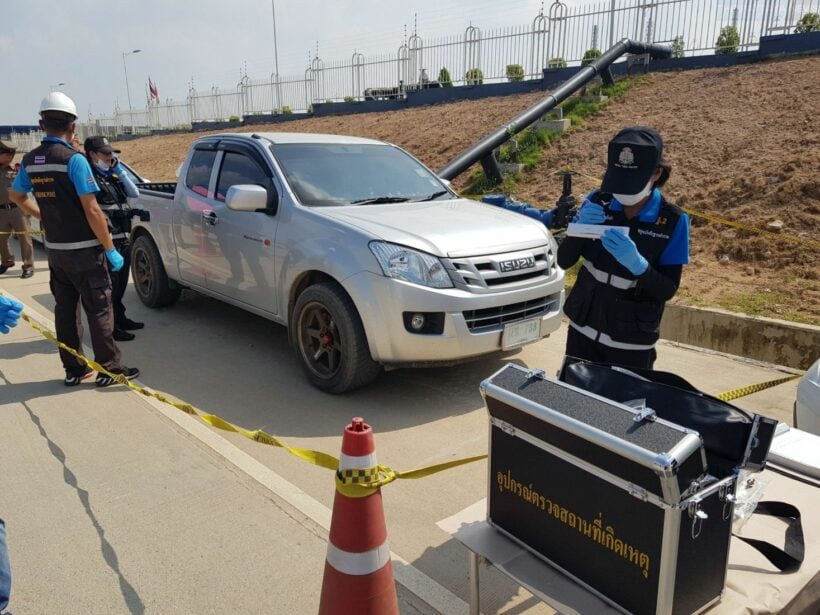 The pickup truck used by three drug defendants, who attacked police and escaped from a Pattaya Court, has been located and seized in Chon Buri. Police have arrested two people suspected of helping the three escapees. The Isuzu truck was silver\white in colour, not bronze as originally reported.

Police found the truck at an industrial park near the home of Noi Nilthes, one of the three prisoners. A security guard at the park says a man aged about 30 parked the truck and placed a large steel cutting tool inside, then rode off on a motorcycle driven by a woman.

The other fugitives are 39 year old American Bart Allen Helmus and his Thai wife Sirinapa Wisetrit. Police say an accomplice picked up the three in another vehicle. From Pattaya it would be easy for them to try to sneak out of the country and police are watching possible escape routes.

Detectives are also seeking people who might have helped them in their escape, and have detained two suspects. The couple, identified only as ‘Max’ and ‘Orn’, left the truck in the industrial park with the keys inside. No more details have been revealed at this stage and the investigation remains fluid.

The Pattaya Court and police are investigating how the fugitives were able to get hold of the knife and gun used in their escape. A police captain was stabbed and a warning shot was fired to clear the way for the fugitives. The officer remains in intensive care but is expected to recover.

Police say the three now face five more charges, including attempted murder of a police officer and illegal use of weapons. They warn that the suspects are considered armed and very dangerous and the public should not approach them but rather call the police if they are spotted.