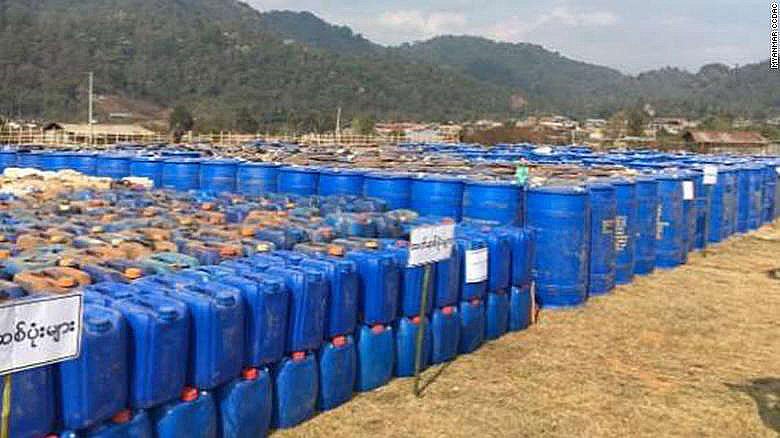 “Truly off-the-charts.” That was the assessment of Jeremy Douglas from the UN Office of Drugs and Crime talking about a major drug seizure in Myanmar’s northern Shan state. How off the charts?

South east Asia, generally, has been spared an opioid crisis, similar to the one that has been sweeping the US, but experts warn that drug producers in Asia may continue the switch to synthetic opioids, made to mimic the chemical structure and effects of poppy-based drugs. The Golden Triangle, straddling northern Thailand, Laos and Myanmar, remains the world’s centre of poppy cultivation. But in recent decades the production of synthetic drugs has pushed the illicit factories deeper into the forests of Myanmar, often semi-portable, making their detection much more difficult than the open poppy fields.

The Golden Triangle is still notorious for its lawlessness, especially on the Burmese side of the borders, mostly governed by local militias and warlords and out of reach of the largely ineffective and remote Myanmar government.

The result is an unprecedented explosion in the synthetic drug trade. The methamphetamine market in East and South east Asia is now valued around $61.4 billion a year, according to the UNODC report.

The potency of synthetic opioids like fentanyl means it is easier to overdose. Laced with other illicit drugs, consumers often have no real idea what they are taking. A trio of overdoses in Bangkok last September was one of the first indications that fentanyl had appeared in the city’s heroin chain.

Jeremy Douglas, regional coordinator for the UN Office of Drugs and Crime says that the amount of methylfentanyl precursor chemicals seized could manufacture a batch of synthetic opioids “large enough to replace the region’s heroin production for a year”.

“This may be the moment we have feared, synthetic opioids are in the region in a big way. It’s clear that a network of production facilities like those found would not be possible without the involvement and financial backing of serious transnational organised criminal groups.”

The report also claims that authorities uncovered evidence “that some militias operating in the lawless areas of northern Myanmar were involved in the trade”, though the report neglected to lay out evidence about this claim. Drug law enforcement agencies in the region have long accused the armed groups in northern Myanmar of being complicit in the region’s drug trade.

33 people were arrested in the operations, which were carried out between February and April.