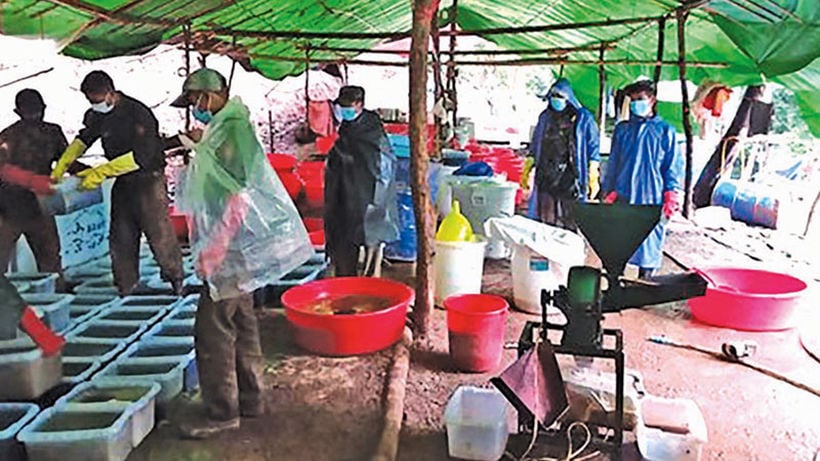 PHOTO: A small meth lab raided in the Shan State, one of many thousands of undetected facilities, hidden under the jungle canopy – Daily News

Thailand is becoming a major conduit for drug cartels, according to Niyom Termsrisuk, secretary-general of the Office of the Narcotics Control Board. The growth of meth labs has exploded in the lawless Shan State of Myanmar, north of Chiang Mai, with better roads and newer, smaller, transportable meth factories keeping ahead of attempts of enforcement.

An ongoing case involving smuggling drugs from Thailand to Australia shows that “Thailand has become a connecting point for the Golden Triangle and destination countries, due to its convenient transportation.”

A case of drug importation from Thailand to Australia in April was again in the spotlight this week as suspects appeared in court over Australia’s largest-ever seizure of methamphetamine, which was shipped from Bangkok in stereo speakers.

In April Australian police found vacuum-packed packages containing crystal methamphetamine and heroin, valued at 24.8 billion baht, hidden in speakers at the Melbourne waterfront. They tracked down the smugglers, 38 year old Stephen Mizzi, and two married customs agents, Rachel Cachia, and Donovan Rodrigues, both 37 years old, who were all sentenced to life in prison.

A police spokesperson says police and authorities will step up counter-smuggling measures, including beefing up border checkpoints. Security forces have also been told to watch for smugglers coming across the mountains in Thailand’s north.

The ONCB is expected to set up more vehicle checkpoints and ramp up efforts to fight drug addiction in communities, the Bangkok Post reports, and police will step up campaigns against drug use in schools and nightclubs.