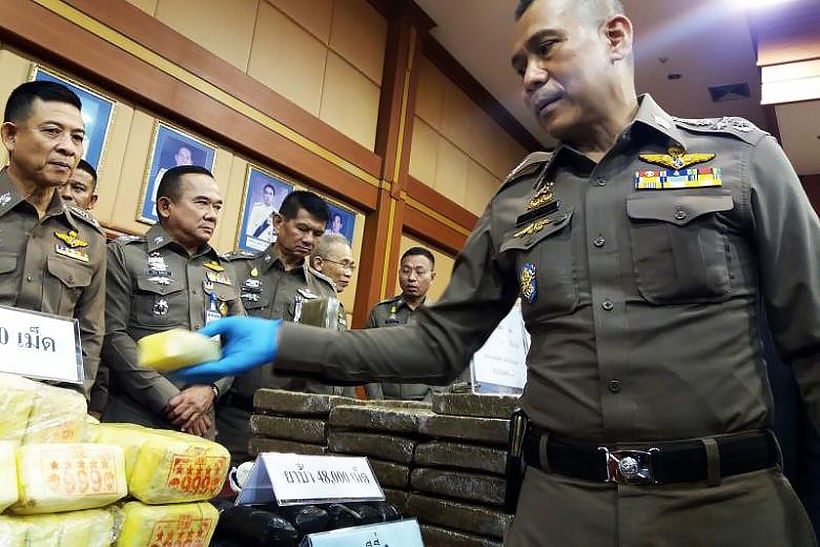 Thailand’s lockdown due to the Covid-19 crisis may have put a damper on drug smuggling activities, but that’s all over now. The secretary-general of the Office of the Narcotics Control Board says traffickers are smuggling large quantities of crystal meth (“ice”) to unload stocks which had become stalled the country due to travel restrictions. He told a press briefing that crystal meth has once again begun to flood into Thailand despite Myanmar’s recent crackdown.

So far this fiscal year, 11 tonnes of crystal meth have been seized by authorities. According to the ONCB’s operation centre, only 10.8 tonnes were seized in the whole of 2019. He believes most consignments were destined for third countries such as Malaysia, Indonesia, the Philippines, Japan, Australia and New Zealand.

“As the government started to relax Covid-19 measures, drugs from the Golden Triangle have made a return. Smuggling had been obstructed by national lockdowns as well as Myanmar’s heavy crackdown on production. Thailand’s geography, with its borders adjacent to drug production sites in the Golden Triangle, and its status as a hub that connects land, air, and maritime transport make it hard for the country to avoid being used as a route to smuggle crystal meth to other regions.”

The UN Office on Drugs and Crime has noted that Thailand and countries in the Mekong subregion are facing increasingly severe narcotic problems, especially with crystal meth and other synthetic drugs. The Golden Triangle is now the world’s leading producer of meth as production has shifted to meth tablets and crystal meth, for export to the United States and across East and Southeast Asia.

During the Covid-19 lockdown easing from May–July, the Thai authorities made 8 arrests related to the smuggling of over 100 kilograms of crystal meth. On Saturday, police in Surat Thani arrested 3 men for smuggling over a tonne of crystal meth hidden in cow dung. The smugglers said they had brought the crystal meth from storage in the central province of Samut Sakhon and were going to drop it in Satun province in Southern Thailand. The haul was expected to fetch 3.6 billion baht if sold abroad.