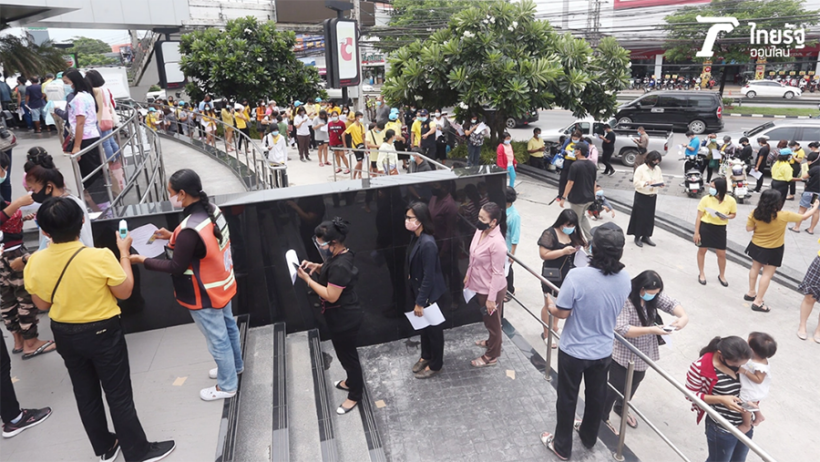 Locals in the eastern province of Rayong, are lining up to be tested for the Covid-19 virus, following the news that a visiting Egyptian airman tested positive after being exempted from quarantine. The PM has already apologised for the mess and promised a review into the rules that meant none of the visiting aircrew had to fulfil the mandatory quarantine required of other foreign arrivals and repatriating Thai citizens. It’s understood the governor of Rayong province has already been “transferred” to Nakhon Pathom province in central Thailand.

A report in Khaosod English says 3 mobile testing units have been set up at Rayong’s Laem Thong department store, the site of visits from members of the Egyptian aircrew last week. The government’s Covid-19 task force says it’s contacting all shoppers who registered their visits through the Thai Chana platform and has invited them to be tested. It’s understood that test results will be sent via SMS. Dozens of locals are lining up to be tested, with the chief of the Institute for Urban Disease Control and Prevention encouraging anyone who believes they may be at risk to stop by.

“We want to offer the service to those who are likely to have had contact with the group. But everyone is welcomed.”

Locals in Rayong are angry and frustrated at the latest development, which comes as the city was just starting to emerge from the nationwide lock-down and starting to welcome domestic tourists. Hundreds of schools in the province are closed once more, with the D Varee Diva Central Rayong Hotel, where the air crew was staying, also shut for deep cleaning.