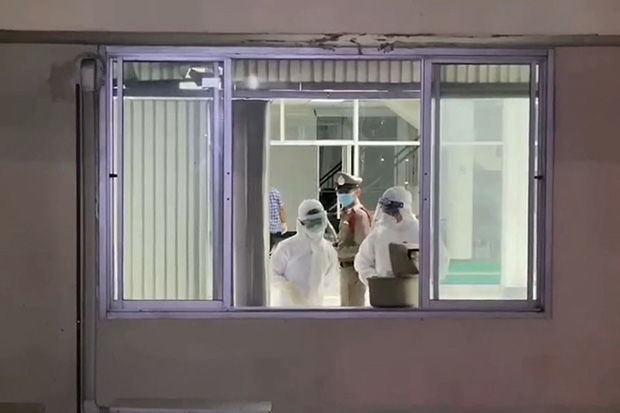 A 51 year old Muslim man from Thailand’s deep south was set to be released from quarantine today but tragically jumped to his death from the 8th floor of a state hospital in Samut Prakan this morning.

Police arrived at the scene in Bang Ya Phraek around 2.30am this morning where they found the body of a man in a pool of blood on the second floor hospital terrace. Hi body was sent to the Forensic Medicine Institute for autopsy.

The man was from Narathiwat in the deep south of Thailand and was among the group of 76 Muslim men who recently returned from Indonesia, with over half testing positive for Coronavirus last week. When he returned to Thailand at Suvarnabhumi Airport he was required to spend 14 days under supervised quarantine.

Yesterday was his 13th day in quarantine. He tested negative for Covid-19 and was due to be released today but before that could happen, tragedy struck.

According to police reports, the man became irate early this morning causing his three roommates to lock him out of the room. Reports say that he began destroying property around him prompting the nurse on duty to call for security.

The guards tried to calm him down, reminding him that he would be discharged in the morning, but in his state of hysteria, he ran to the window on the 8th floor (Bangkok Post reports 5th floor however PPTC HD 36 reports 8th floor) and leapt to his death.