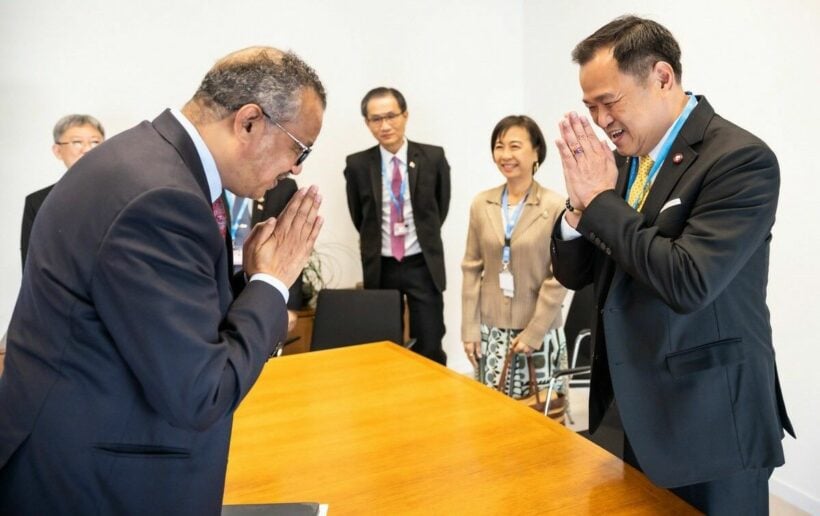 The Thai government is patting itself on the back again, with a spokesperson saying officials have been praised by the World Health Organisation. Traisuree Taisaranakul says the administration has been cited as a “role model” for its management of the Covid-19 pandemic.

She was speaking after a meeting between the health minister, Anutin Charnvirakul, WHO director-general Tedros Adhanom Ghrebreyesus, and the WHO’s regional director for Southeast Asia, Poonam Khetrapal Singh. According to a Nation Thailand report, the meeting took place at the 75th World Health Assembly in Geneva, Switzerland. Traisuree says both Ghrebreyesus and Singh praised Thailand for its handling of Covid-19.

“The WHO will use Thailand’s Covid-19 management as a role model to create an international standard for disease management worldwide.”

According to Traisuree, the WHO also praised Thailand’s vaccine rollout, with over 81% of people having now received their first dose and over 75% having received their second. The organisation has also thanked Thailand for participating in various projects, including the “WHO Biohub”, a system for the research and development of vaccines to target emerging diseases.

It’s understood Anutin has invited Ghrebreyesus to a high-level meeting on health and the economy in Bangkok. The Asia Pacific Economic Cooperation will take place in the capital from August 22 to 26. During that period, Thailand will also open the ASEAN Centre for Public Health Emergencies and Emerging Diseases.

According to the Nation Thailand report, Anutin has thanked the WHO for nominating Thailand as a pilot country for its Universal Health and Preparedness Review, between April 21 and 29. Anutin says the country is ready to share its UHPR experience with other countries.

Smithydog
It wouldn't surprise me if this was his statement as he has expressed similar remarks in the past. https://www.marketwatch.com/story/who-head-has-singled-out-one-developing-country-for-its-success-in-managing-the-coronavirus-pandemic-2020-11-13 Now the WHO has recently conducted a country review of the pandemic in Thailand, one of the first 4 countries to…

palooka
Lets see Very late starting anything by way of manageing Covid. Bought over priced dud vaccines from China. When it was under control told everyone to have a good Song Krong holiday and spread it around the country. Going from…

Poolie
Well bashed everyone!! A sterling performance!
JJJ
If someone praises you and no one hears it, is it really praise?
JJJ
But the bigger question is does anyone really care what corrupt elite medical bureaucrats give out as grades? To this day, how does Thailand justify the excessive hospitalization of healthy COVID positive test patients? It’s a waste of resources and…