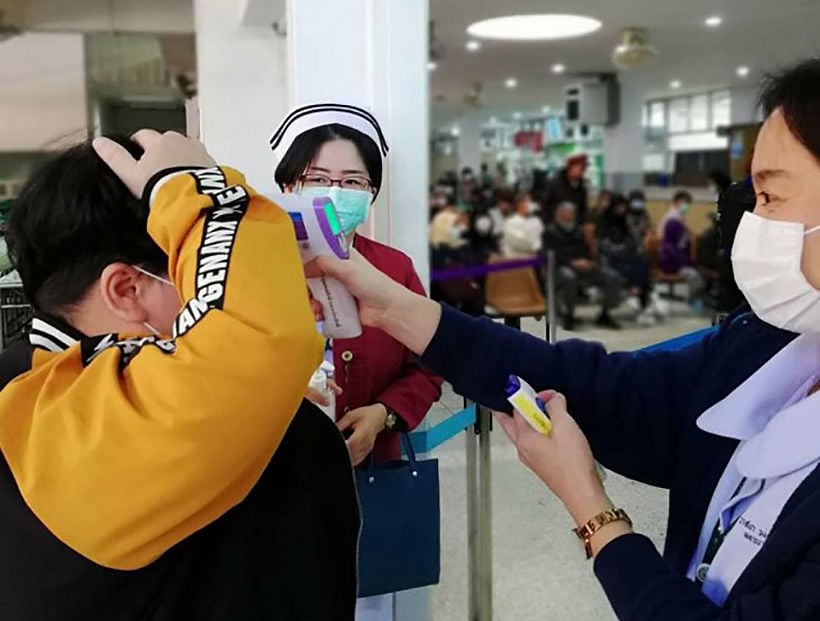 PHOTO: Hospital staff check all people coming in and out of the hospital - The Nation

Chiang Mai health officials have confirmed the first positive case of the coronavirus in the northern city. The patient had come for treatment from Maharaj Nakorn Chiang Mai Hospital and later tested positive for the virus.

The Ministry of Public Health announced yesterday that five more people in Thailand had been confirmed as carrying the novel coronavirus, and one of the five was the patient who had come to the Chiang Mai hospital for treatment.

The five new cases bring the total of confirmed cases in Thailand to 19. Seven of the patients have already recovered and returned home.

“The patient had been suffering from pneumonia and was treated until the fever went down and the overall condition improved gradually. The hospital has exercised the highest caution in treating the patient to prevent the spread of the virus to other patients and hospital staff.”

“Anyone who came into contact with the patient is now being monitored in a quarantine environment.”

The hospital closed most of the facility’s entrances and exits of the hospital, and deployed security staff to monitor the ones that had to remain open.

“These entrances and exits will be equipped with thermo-scanners and will offer free alcohol gel and face masks to visitors.”

The hospital is asking the relatives of the patients to avoid visiting at this moment to avoid crowding in the hospital and reduce the chance of the virus spreading.”

Meanwhile, the Thai PM Prayut Chan-o-cha has put the brakes a proposal by the Health Minister Anutin Charnvirakul to suspend visas-on-arrival for Chinese tourists, fearing it will have a further negative impact.

The prime minister asked Anutin to consult with other government agencies concerned, especially the Tourism Ministry, before making his proposal to Cabinet. (In other words, it won’t be happening)