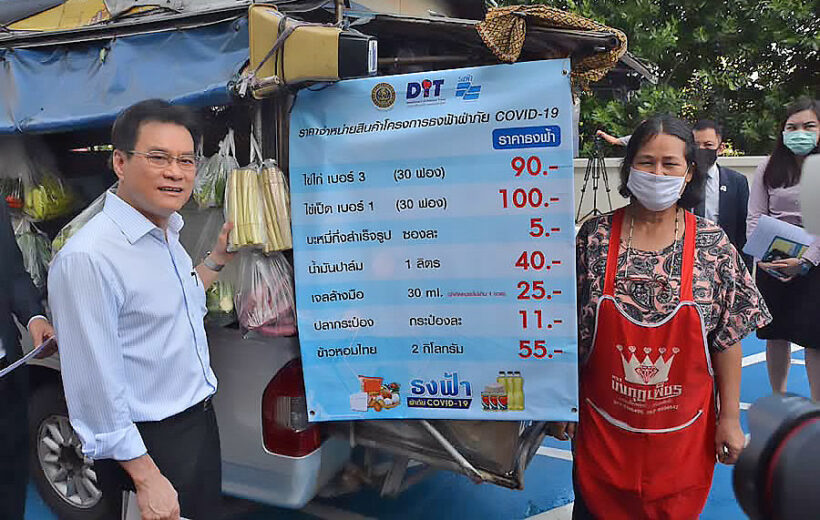 With the state of emergency requiring people to stay home as much as possible and keeping their ‘social distance’ in public to fight the spread of the Covid-19 coronavirus, the Ministry of Commerce has launched a fleet of Blue Flag vehicles to sell and deliver groceries and other consumer goods at affordable prices, right to people’s homes.

Starting yesterday, mobile grocery trucks are delivering products from major fresh markets to various communities in and around Bangkok. The markets include Minburi Market, Si Mum Mueang Market, Bang Yai Market and Samrong Market. The trucks are selling fresh food and other goods as part of the Blue Flag value scheme, such as eggs at 90 baht per pack of 30, instant noodles at 5 baht per packet, palm oil at 40 baht per bottle, canned fish at 11 baht per tin, two kilograms of rice for 55 baht and 30 milligrams of hand sanitiser at 25 baht.

The Blue Flag scheme is part of the government’s aid package for low-income earners who are issued with smart cards allowing them to get monthly subsidies to buy cheap consumer products from designated shops.

Deputy PM and Commerce Minister Jurin Laksanawisit, says that 200 trucks are involved initially, which travel to communities in Bangkok and neighbouring provinces. Their sales will be assessed daily, and more vehicles will be added if there is high demand. The Blue Flag trucks will ensure that the market situation remains stable. Many vendors, including supermarkets are already selling their products online and offering delivery.

Jurin said he’d hold a meeting with operators of traditional and online supermarkets, delivery companies such as Line Man, La La Move, Food Panda and Grab, as well as owners of community shops and Smart groceries today. They’ll discuss the problems and challenges that need government help, as more stringent measures are expected following the invocation of the Emergency Decree.