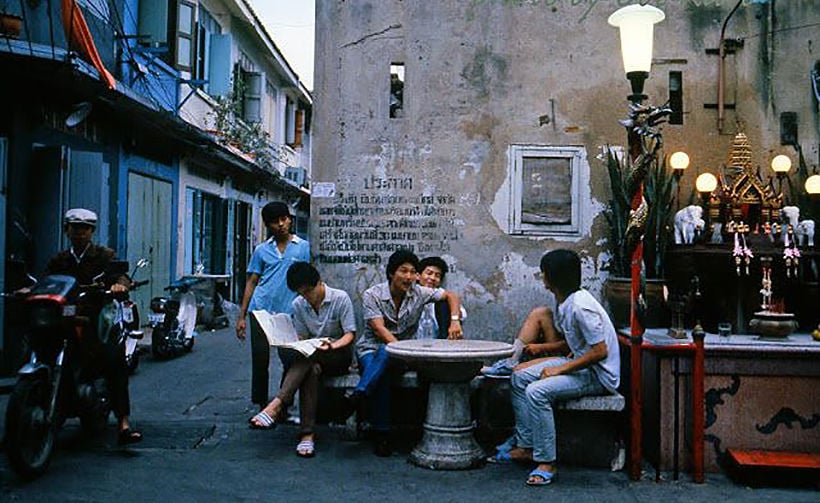 When ‘One Night In Bangkok’ was released in 1984 it was an unlikely hit- the opening song from a (at the time) little-known stage pop-opera called ‘Chess’. The song made Number 1 in South Africa, West Germany, Switzerland and Australia, and Number 3 in Canada and the United States. It has remained a staple of Classic Hit radio ever since. Have a listen below…

The musical was the first outing for the two ‘Bs’ in ABBA – Benny Andersson and Bjoern Ulvaeus. Their pop grooves had made ABBA one of the most famous music groups in the world between 1973 and 1982 with a string of hits including 20 singles in the Billboard Top 100 from eight albums, etc, etc. The lyrics of the song were penned by Tim Rice (Jesus Christ Superstar, Evita, Joseph and his amazing technicolour dreamcoat, Aladdin, The Lion King, Beauty and the Beast).

In the opening song of ‘Chess’, the American chess champion Freddie Trumper gets ready for a chess game with his Russian counterpart. He ridicules Bangkok’s ‘pleasures’ and tourist attractions – the Chao Phraya River (“muddy old river”), Wat Pho (“reclining Buddha”), and the red-light distractions. The choruses are more complimentary.

At the time the sarcasm of the song didn’t go down well with the Thai Mass Communications Organisation (now the NBTC) issuing a ban on the song in 1985, saying its lyrics “cause misunderstanding about Thai society and show disrespect towards Buddhism”, a line still trotted out about inappropriate Instagrammers and their selfies in front of Thai temples.

We’re not sure if the ban was ever lifted but I hear the song played on Thai stations from time to time. At the time, when Bangkok was less on the tourist map than now, the song was a lone reference point for westerners.

How does it stand up thirty-five years after becoming a world-wide hit? Comment on our Facebook Page.

One Night In Bangkok

Bangkok, Oriental setting
And the city don’t know that the city is getting
The creme de la creme of the chess world
In a show with everything but Yul Brynner (referring to the actor’s starring role as the King of Siam in ‘The King and I’)

Time flies, doesn’t seem a minute
Since the Tirolean spa had the chess boys in it
All change don’t you know that when you
Play at this level there’s no ordinary venue
It’s Iceland or the Philippines or Hastings or,
Or this place!

One town’s very like another
When your head’s down over your pieces, brother
It’s a drag, it’s a bore, it’s really such a pity
To be looking at the board, not looking at the city
Whaddya mean?
Ya seen one crowded, polluted, stinking town
Tea, girls, warm, sweet
Some are set up in the Somerset Maugham suite
Get thai’d, you’re talking to a tourist
Whose every move’s among the purest
I get my kicks above the waistline, sunshine

I don’t see you guys rating
The kind of mate I’m contemplating
I’d let you watch, I would invite you
But the queens we use would not excite you
So you better go back to your bars, your temples
Your massage parlours

One night in Bangkok and the world’s your oyster
The bars are temples but the pearls ain’t free
You’ll find a god in every golden cloister
A little flesh, a little history
I can feel an angel sliding up to me

Thailand’s Koh Chang by numbers, another island on the rise