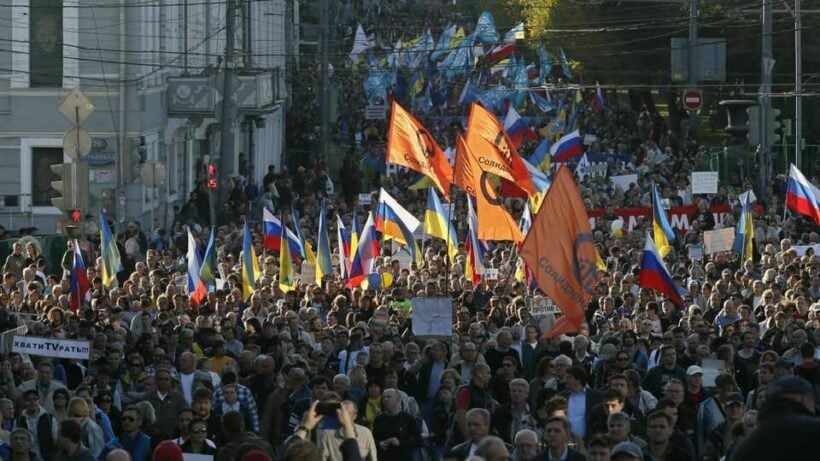 Russians take to the streets of Moscow to protest against the invasion of Ukraine. PHOTO: Facebook/Ewa Eva

The office of Ukrainian President Volodymyr Zelensky says officials will meet for talks with a Russian delegation at the Belarus border. AFP reports that the move comes after a phone call between Zelensky and Belarusian leader, Alexander Lukashenko.

“The politicians agreed that the Ukrainian delegation would meet the Russian one without preconditions at the Ukraine-Belarus border, near the Pripyat River.”

It’s understood that during the call between Zelensky and Lukashenko, the leader of Belarus gave assurances that “all planes, helicopters, and missiles stationed on Belarus territory will remain on the ground during the travel, negotiations and return of the Ukrainian delegation”.

The Kremlin had wanted to hold talks in Belarus itself, with Russian President Vladimir Putin saying there was a Russian delegation ready for talks in the city of Gomel. However, Zelensky has refused to agree to talks in Belarus, after Russian troops were allowed to assemble at the northern border with Ukraine prior to the invasion. Instead, Kyiv had proposed the cities of Warsaw, Istanbul, Baku, Bratislava, or Budapest as options.

Ukraine continues to defend itself against the Russian invasion, managing to hold off Putin’s troops from entering Ukraine’s second city of Kharkiv yesterday. In Putin’s latest move, the Russian leader has ordered his nuclear deterrent forces on high alert, an escalatory move which has been strongly condemned by the international community.

Meanwhile, protests against the invasion of Ukraine have been taking place in cities across the world, most notably in Russian cities like Moscow and St Petersburg, with over 2,000 people detained so far.

Freeduhdumb
The "Soft Invasion" of Ukraine seems to be working. The encirclement of the major cities are underway and will eventually lead to a capitulation. The alternative won't be pleasant. Let us hope/pray, whatever your mechanism is, that rational heads will…

DoUKnowWhoIAm
1 hour ago, Thaiger said: Vladimir Putin In a few months ahead, I hope we'll hear "ladies and gentlemen, we got him", when the dictator has been dug out from his hiding hole.

Evacuation of Thai nationals from Ukraine gets underway

The west weaponises SWIFT as it ramps up sanctions against Russia