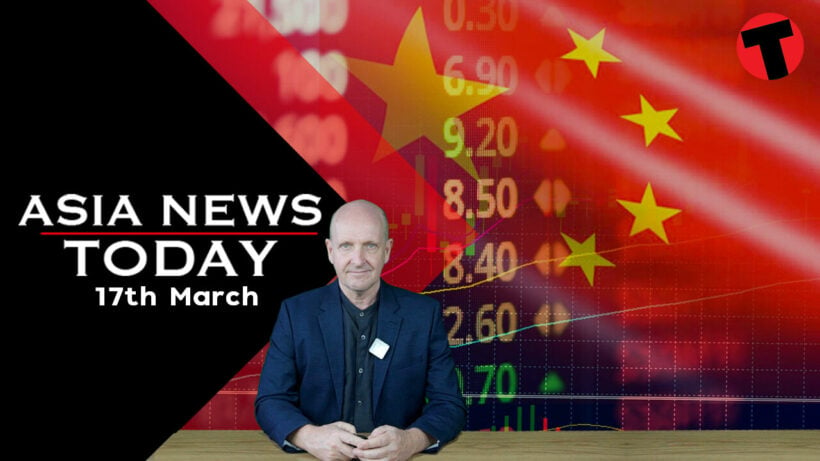 China’s top economic official have stepped in to reassure investors, claiming that Beijing will take measures to support the Chinese economy and financial markets. The comments follow a sharp sell-off that has been partly fuelled by reaction from Russia’s invasion of Ukraine. Liu He, a vice-premier and economic adviser to the Communist party executive, says the government will take measures to “boost the economy in the first quarter”, and introduce “policies that are favourable to the market”. He said he’s convened a meeting of the State Council’s Financial Stability and Development Committee where details will be hammered out before being urgently implemented. Investors in Shanghai, Hong Kong and Shenzhen, along with US-listed Chinese companies, are being spooked by China’s slowing economic growth, rising inflation, the Russia/Ukraine war and the ongoing crackdown by the CCP on previously fast-growing companies in the technology, education and property sectors. They’ve also been reacting to the over-heated property market which has ended up with some high profile defaults from some of the country’s biggest property developers over the past 4 months. Hong Kong’s Hang Seng index yesterday gained a robust 9 per cent after regional markets rallied in response to the announcement from Beijing.

Vietnam has now scrapped quarantine and other travel red tape for foreign travellers as it attempts to fully reopen its border after two years of almost no tourism into the country. But you’ll need to show a negative PCR test conducted before your departure. Travellers will also need to monitor their own health during the first 10 days of their stay and notify Vietnamese authorities if they experience any symptoms of coronavirus. Vietnam also reinstated visa exemptions and the visas on arrival, similar to their pre-pandemic status. The Vietnamese tourism industry is reported to make up around 10% of the country’s GDP before the pandemic. The reopening of Vietnamese borders comes at the same time as record numbers of new COVID infections, with a daily average of 170 – 180,000 new infections over the past two weeks.

Malaysia’s experience of the Covid pandemic has cost the country a decade’s worth of development and progress, this from the Umno political party deputy president. He claimed that 90% of Malay entrepreneurs were at risk of bankruptcy and business failures because of the restrictions imposed over the last 2 years. Whilst pointing out the impact of the restrictions on ethnic Malay, he also said that retirement funds were also draining, as people dug into their retirement finances to survive the pandemic.Mohamad Hasan was using the statistics and comments about the impact on ethnic Malays as a reason for supporters of the UMNO party to rally for the next set of elections in Malaysia.

Motorcycles have been riding through Jakarta yesterday as Indonesia gears up to host its first moto grand prix in 25 years this weekend. Indonesia has one of the world’s biggest communities of motorbike and motorcycle users, and bike-race fans. Indonesia has 122 million registered motorbikes.Sunday’s race, the second of the 2022 MotoGP World Championship calendar, is taking place at the Mandalika International Street Circuit on Lombok, the island next door to Bali.The parade through Jakarta featured Spain’s six-time world champion Marc Marquez, as they rode through the capital greeting Indonesian fans. They were welcomed by President Joko Widodo, himself a fan, a fellow biker and supported of the Moto GP Circuit. The race will start on Sunday at 3pm, Indonesia time.

A Canadian man, 63 year old Marshall Ruskin, wanted in connection with an alleged child sex trafficking ring in the Philippines, has abandoned a motion in Court to demand the return of computer equipment seized during the investigation into his activities. Ruskin has been on the radar of Winnipeg police since 2011 for his alleged “interest in young children.” Ruskin is said to have travelled to the Philippines 15 times between 2013 and 2016, according to a police search warrant. He remains a free man in Canada, despite being wanted on three arrest warrants in the Philippines issued since 2016. He’s accused of paying for videos and photos of Filipino girls as young as 18 months old whilst being sexually abused and tortured. Back in 2019, Winnipeg police issued a search warrant on the man’s home in Garden City, Winnipeg, where he was living with his 28 year old Filipino wife. Police seized his laptop, other computers and mobile phones. He’s also alleged to having sent thousands of dollars to the Philippines to watch the live sexual abuse of an 11 year old girl on Skype. Court documents have also revealed Mr. Ruskin’s alleged connection with Peter Scully, arrested 7 years ago after a global manhunt and now considered one of the world’s most notorious pedophiles. There’s a lot of other evidence brought up in the current court proceedings that are simply too revolting and disturbing to report.

The owners of entertainment venues across Thailand have reacted with cautious optimism to reports they could soon be allowed to re-open. The resumption of Thailand’s nightlife is planned to be on the agenda of tomorrow’s meeting of the government’s Covid-19 task force, called the CCSA.Venue operators have lobbied hard over the past year, pointing out that nightlife venues are important to foreign tourism, and if the government is looking at ways to attract more visitors, it should allow bars, clubs, and other entertainment venues to re-open. Bangkok venue operators have also been lobbying for alcohol sales to be extended beyond the current official closing time of 11pm. The Professional Entertainment Network Confederation of Thailand is also calling for nightlife performers, such as singers and musicians, to be allowed to return to work once Covid-19 is declared endemic. Current plans from the Thai government aims to downgrade the virus to an endemic stage from July 1.