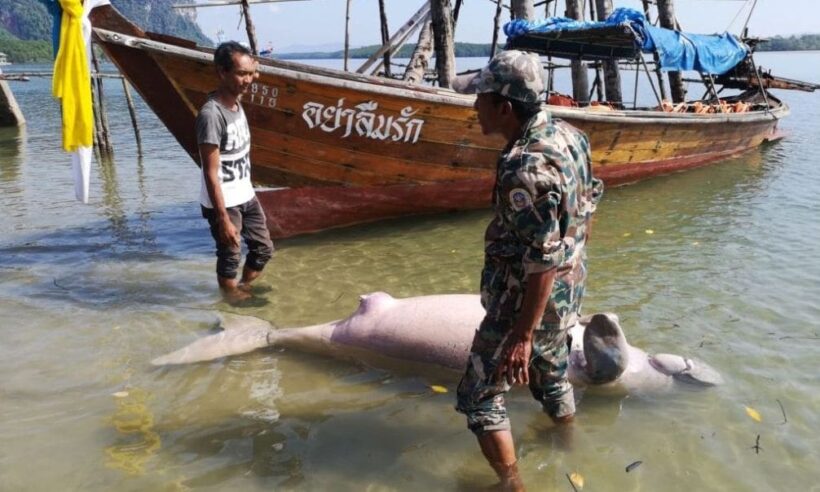 A heavily-pregnant dugong, found off Koh Libong in Trang a week ago, has had an autopsy to investigate the cause of death. It was the fifth dugong in the area killed by speedboats this year.

The findings indicate that this dugong too came into contact with a local boat propellor.

The dugong’s decomposing carcass was found on November 26 in the sea off Koh Libong. The injuries indicate it died after being run over by a speedboat whilst feeding on sea-grass.

The crash impact caused the 2.6 metre long, 250 kilogram Dugong’s spine to dislodge, break its right-side ribs and caused bleeding into its lung, resulting in instant death, along with the 9.5 kilogram foetus, according to a source at the Phuket Marine Biological Centre familiar with the autopsy results.

This was the fifth death of a dugong in the Trang area this year. Koh Libong wildlife sanctuary head Chaipreuk Weerawong and Hat Chao Mai National Park head Narong Khong-ied are calling a meeting of related officials, community leaders and villagers, along with boat operators to find a solution to avoid more deaths of the endangered species.

The meeting will discuss solutions, including asking for cooperation from speedboat captains from travelling through the seagrass areas in order to protect the rare marine mammal.