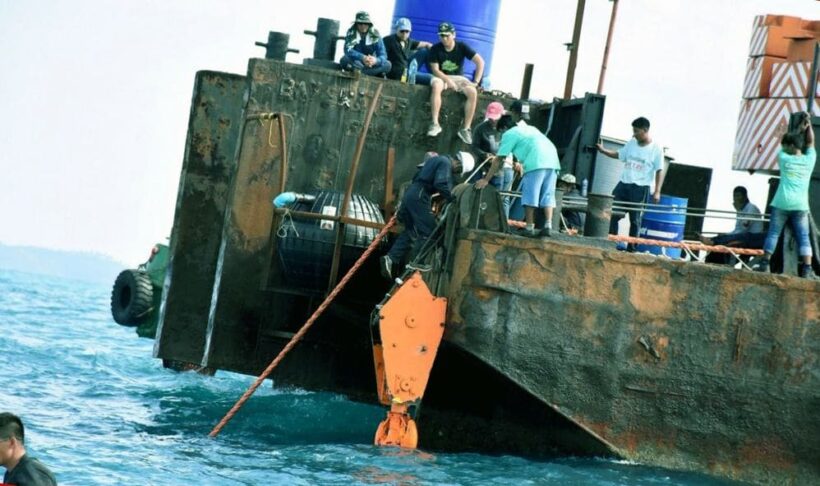 The Phoenix, the boat that sank on July 5 off Phuket’s south west coast, causing the drowning of 47 Chinese tourists, remains 45 metres underwater as the new salvage team have little more success than the original salvage team who threw in the towel a week ago.

“We expect difficulties ahead but are still confident that the experience of the Singapore team would help us overcome the obstacles.”

Spitz Tech, the original contractors, complained about the same strong currents in the two months they attempted the salvage. Since then Sunquest Marine of Singapore, under the direction of the acting immigration department chief Maj Gen Surachate Hakparn, has been wrestling with the elements.

This time, however, they will have a 1200 tonne pontoon crane at their disposal which is due to arrive this evening. The tug and crane, making their way up from Singapore over the last week, have also been reporting ‘wind and waves’ slowing down their progress.

The new, latest, revised, updated deadline to raise the Phoenix is this Friday with Pol Lt Passakorn saying the “wind and waves are changing every day. And that could delay the work.”

Meanwhile the train wreck of, principally, Chinese tourism to Thailand and Phuket, continues to unravel in slow motion.

Tourism chiefs in Phuket are playing down the drop in Chinese tourism saying that arrivals from other markets will “fill in the gaps” left by Chinese tourists. TheThai  Tourism Minister admitted last week that Chinese tourists coming to Phuket had dropped by 25%. Local hotels and tour companies variously quote numbers more like 50-70% drop in tourists out of mainland China.

One prominent hotel MD told The Thaiger, on condition of anonymity, “just look around the roads. Where are the Chinese tour buses? We don’t Chinese tourists in the streets, we don’t see them in our forward bookings. The Tourism Minister’s figures are either very optimistic or he’s been consulting a fortune teller.”

Tourism officials appears unable to grapple with ways to rebuild confidence in the sector, which has contributed up to 30% of all Phuket tourism over the past 3 years.

Chinese social media has led the exodus panning the response to the original tragedy, including the Deputy PM Prawit Wongsuwan’s blame-game, “The Chinese are killing Chinese”, the ponderous investigation (which has still not concluded) and the botched search in the immediate aftermath of the sinking, which saw search and rescue efforts called off hours after the disaster and resumed the next morning.

Another Deputy PM, Somkid Jatusripitak, the government’s economic tzar, was in Shanghai last week speaking to Alibaba’s Jack Ma about ways to reboot Chinese tourism into the Phuket and Thailand.