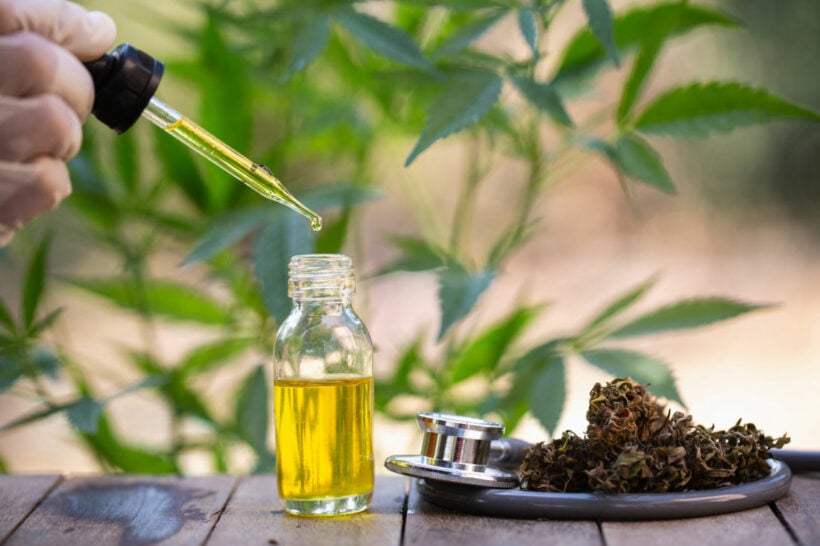 Police entered the house with a search warrant and found 3.4 million baht cash along with quantities of the CBD oil they were selling online. Officials received information that CBD oil was being manufactured in the house by the pair and then selling online. Police arrested 34 year old ‘Nipon’ and 31 year old ‘Wichunee’, a married couple. The police found evidence of CBD oil production and oil that was already packaged in small bottles. There were at least 30 boxes already packed ready to be shipped.

Officials seized all evidence as they prepare the case for prosecution.

Police received a complaint at the start of the month that a 39 year old woman with cancer had ordered some CBD oil from the couple. Soon after, according to police, the woman died. The relatives believe the death was related to the use of CBD oil but the claims have not been verified by medical professionals at this stage.

Thai Residents report that evidence was found in the investigation, that the marijuana was ordered from a neighbouring country. The couple has been selling their products online for over 2 years.

Wichunee told police that she graduated with a BBA Degree and started selling fruit that could “repel insects” along with some agriculture equipment, then started selling CBD oil because she personally used it and felt that the oil was a success.

She started testing it to cancer patients she knew and reported that the “results were good”. This is when she decided to order marijuana from Laos, prepared the oil in their home and sold it at 1,000 baht per bottle.

Wichunee insists that the 3.4 million in cash has nothing to do with the CBD oil business and that it all came from her agriculture business.