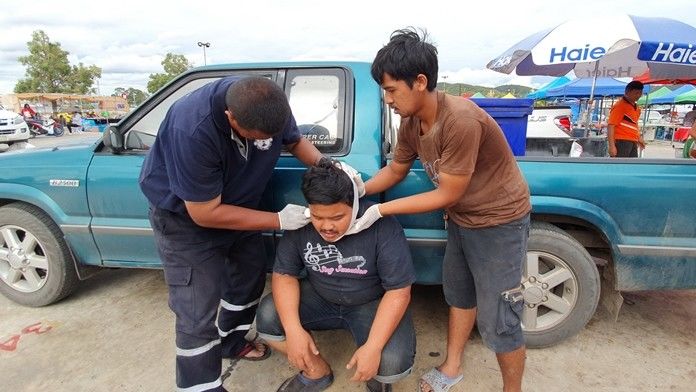 A fried chicken vendor needed medical treatment after being stabbed in the head by a young man working for him in Chonburi province, central Thailand.

Yannawuth Prasomwangsub told police that he and his wife sell fried chicken at the Sattahip flea market and hired 16-year-old Nat to help them just a week ago.

While setting up shop, Yannawuth was missing some utensils and asked Nat if he’d seen them.

It appears the question sent Nat into a rage, as he felt he was being accused of theft. He proceeded to stab his boss in the head with a knife normally used for slicing open durian fruit.

An officer from Sattahip police station was on the scene shortly after, but at this time, it’s not known if charges are being brought against the employee.

A venomous blue ringed octopus was found grilled up on a stick and up for sale at a Pathum Thani. The Department of Marine and Coastal Resources posted photos of the octopus on their Facebook page, warning people to watch what they eat.

While the octopus is small, about the size of a golf ball, its venom contains the powerful neurotoxin tetrodotoxin which blocks sodium channels, causing motor paralysis and respiratory arrests within minutes of exposure. It has enough venom to kill 26 humans. There is no antivenom. The department says the venom can endure heat up to 200 degrees Celsius, so grilling the octopus won’t destroy the toxins.

The department is advising customers to look out for the blue ring pattern.

A Thai singer died after crashing his car into a lamppost while on a video call with his girlfriend. Thai media did not report on the estimated speed, but photos of the wreckage show severe damage. The roof ripped off the Toyota Altis and the car is almost unrecognisable.

23 year old Akkarachai, known as Ice, was found dead at the scene on Pahonyothin Road, or Route 1. He performed at many night venues and events around the Central Thailand province Chai Nat. Ice’s friend told police that he was on his way home to his girlfriend’s house in Nakhon Sawan about 25 kilometres away. While on the phone with his girlfriend, there was suddenly a loud noise and the phone went dead.

Chai Nat police warn people not to use their phones while driving.

Police arrested a monk on drug charges and seized 4.8 million methamphetamine pills from a resort in the Central Thailand province Chai Nat. The man, a senior monk from Chiang Rai, was allegedly hired to help deliver large qualities methamphetamine 3 times and paid 300,000 baht per delivery. The monk allegedly told police that he needed the money to enroll in a master’s degree program.

A photo shows the monk standing in front of a van packed with boxes. Along with the 4.8 million methamphetamine pills, police found a gun with 14 bullets and 11 mobile phones. According to Thai media, it was a significant drug trafficking bust, cracking down on a large network in the Chiang Dao and Chai Nat area. The monk allegedly sat in the van during deliveries to “trick” police and avoid getting searched at police checkpoints.

Court acquits PM Prayut Chan-o-cha, allowing him to stay on at military residence