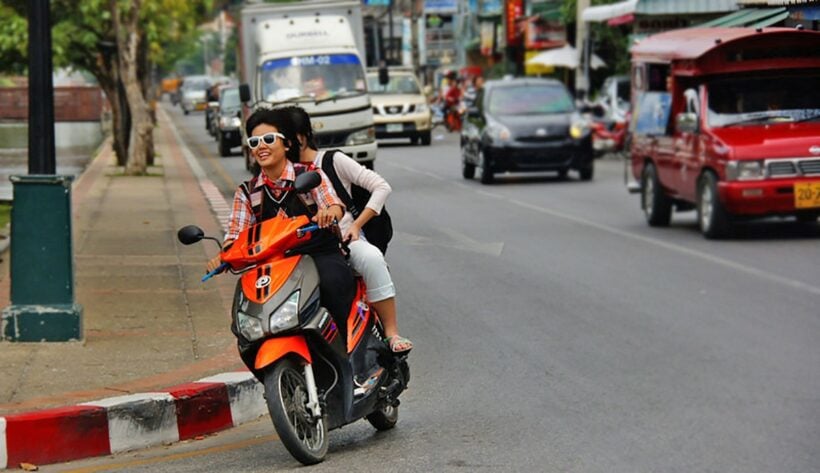 On a recent trip to Ho Chi Minh City, Vietnam, I was struck by an interesting phenomenon traveling from the airport to my hotel. I saw perhaps more than a thousand motorcycle riders and passengers, and only one person was not wearing a helmet. Yet, the entire two weeks I spent in that city, I didn’t see a single police officer giving out tickets enforcing a helmet law.

When I got back to Phuket I read many stories about the tragic deaths of various drivers and passengers (cars and motorcycles). The story emphasised several things.

First, at least two of the three motorcycle riders who were killed (in one story I was reading) were not wearing helmets (no mention as to whether the third rider was or was not).

Second, the police spokesperson in the article pointed out that the police here are constantly giving tickets to riders who fail to wear helmets – Thais and farang. The fine for not wearing a helmet is still 500 baht.

Third, that same spokesperson implied that the police are relatively powerless to stop the riders who insist on disobeying the helmet laws.

Finally, he suggested that it is up to people to protect themselves by wearing helmets.

The first issue is whether having everyone wearing helmets is a good thing and, if it is, how to get them to do it. In the US, where the helmet debate has been studied extensively, the National Highway Traffic Safety Administration (NHTSA) estimates that wearing a helmet reduces the risk of dying in a crash by 37%.

Helmet-less riders are three times more likely than helmeted ones to sustain traumatic brain injuries in the event of a crash. The NHTSA estimates that helmets saved 1,829 motorcyclists’ lives in 2008 and that 822 of the helmet-less motorcyclists who died would have survived if they would have worn helmets.

The World Health Organisation (WHO) concurs, estimating that wearing a helmet correctly can reduce the risk of death by almost 40% and the risk of severe injury by more than 70%. So, let’s assume that wearing helmets is a good thing.

Danai Ruangsorn, president of the Thai Roads Foundation, said the percentage of children wearing helmets is only 7%.

In Thailand, accidents involving motorcycles account for more than 80% of traffic injuries. If punishing non-helmeted riders isn’t the answer, what is? The answer is simple: Create a social norm in which wearing helmets, as in Vietnam, is the usual practice.

A social norm is a group-held belief about how persons should behave in various contexts. Norms in every culture create conformity that allows for people to become socialised to the culture in which they live.

Soap operas are popular in Thailand. Introduce characters and situations on those programs in which helmets are prominently displayed, not just when characters are riding on their bikes, but also when they are transitioning from or to the motorcycles. This model has been effective in Latin American countries during soap opera presentations in encouraging the use of birth control.

The second idea is to establish a public relations campaign in which the message is that other Thais are already using helmets. Being helmet-less will therefore be viewed as being against socially normative behavior.

It is time to change this behavior pattern in Phuket, and Thailand, which contributes nothing but sadness to people’s lives.