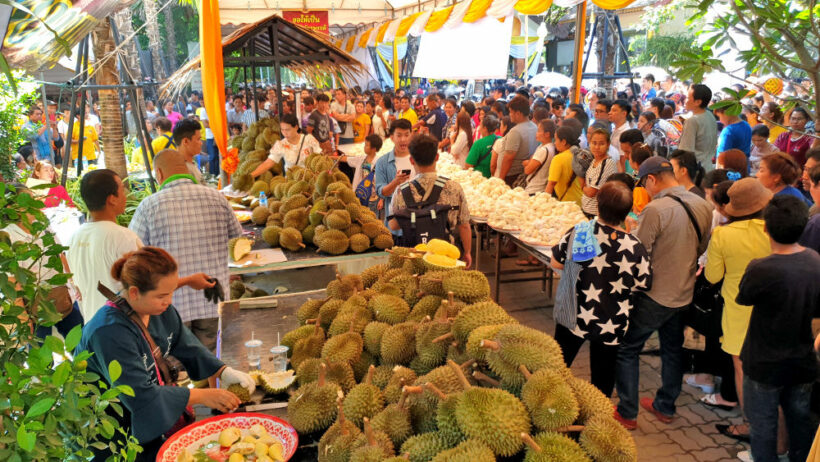 Following the ceremony, hundreds of durian-peeling and serving volunteers handed out the pungent fruit and other snacks to visitors, some of whom arrived as early as 5am.

The seven tonnes of durian came from Rayong and Chanthaburi orchards as well as having another batch on standby if it proved insufficient. 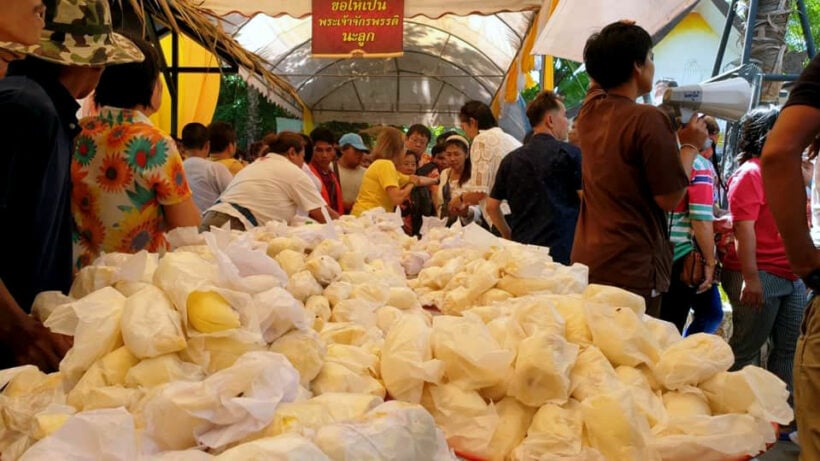 The birthday party of Techin Ploypetch, better known as “DJ Matoom”, is now considered a super-spreader source of Covid-19, with 19 people already found infected after attending the event. According the CCSA spokesperson during the daily briefing today, “Transmissions in Bangkok should be highlighted. They show the possibility of a person becoming a super-spreader”.

The birth of the super spreader birthday party started with a guest to the DJ’s party who had visited a well-known entertainment venue in Chiang Mai between January 1 and 4. He sought a Covid-19 test on January 5 following news that infected people had visited the pub, but tested negative. He should have self quarantined for 14 days, but he still flew to Bangkok and then attended the DJ celebrity’s birthday party on January 9.

DJ Matoom says he met the guest, one of his friend, on January 9, but that friend didn’t know he was infected until January 19 in which he told Matoom.

According to Dr Tanarak Plipat, now acting inspector-general of the Public Health Ministry, an infected person can transmit disease to two others on average, while a “super spreader” will transmit to multiple people.

DJ Matoom and the party’s guest were criticised of violating the disease control measures.

Owners of cars and trucks emitting an excessive amount of black smoke face a fine up to 5,000 baht. The heavy fine is an attempt to reduce air pollution in Bangkok. Along with the fine, the Department of Land Transport will also order the vehicle be suspended from use until its emission system is fixed.

According to the department, from October last year until January, 689,333 vehicles in Bangkok areas have been inspected for black smoke emissions, while 8,762 of them have been suspended from usage. Those vehicles emitting a high volume of smoke, but are under the safety standard, will receive warnings and owners are urged to check vehicle conditions and keep proper maintenance.

Vehicles with exceeding black smoke are urged to check their vehicles at the department’s certified vehicle inspection centres located around Bangkok’s outskirts, including Phutthamonthon, Romklao, and Khlong Luang areas. Motorists are also encouraged to help reduce air pollution caused by black smoke and PM2.5 particles by having their vehicles regularly serviced or alternately switching to electric or NGV-powered vehicles.

In the ongoing investigation into the ketamine-based drug cocktail linked to 11 deaths in Bangkok, police arrested a man who allegedly mixed large amounts of narcotics to make the drug cocktail known as “K powdered milk.” Police say the cocktail is ketamine mixed with methamphetamine, heroin and pharmaceutical pills for anxiety and sleeping.

38 year old Taiwan national Chou Yi Sen, aka “Lupin Taiwan,” was arrested yesterday after police raided his condominium in Bangkok’s Ratchathewi district. Chou allegedly admitted to mixing the drugs to make “K powdered milk” and police say the formulas for the drug mixture were found on his cell phone.

Chou allegedly ran the drug operation from various locations in Bangkok, selling the drugs overseas using the cryptocurrency Bitcoin as well as to buyers in Thailand. Police also searched Chou’s rooms at other condominium the Huai Khawang, Wang Thong Lang and Klong Toey districts, seizing a variety of illicit drugs and equipment as well as a pistol with 8 bullets.