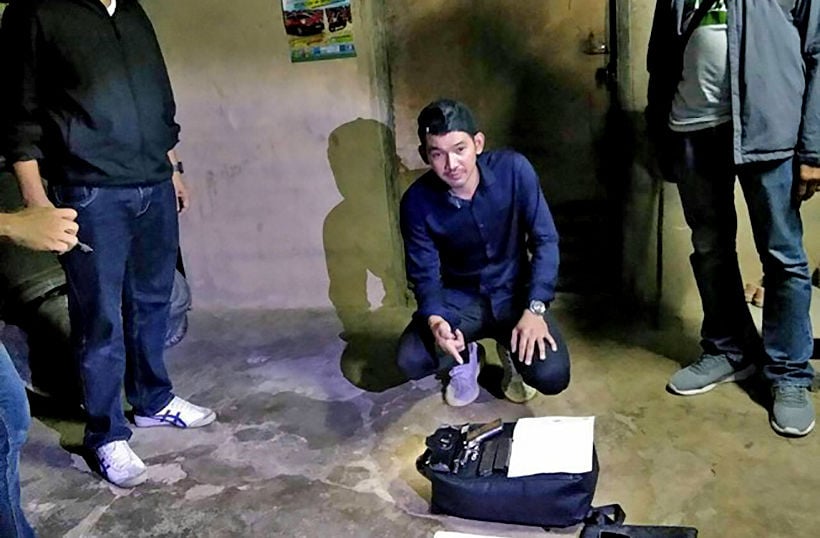 PHOTO: The arrest this morning at a home in Phetchaburi - News1live.com

A lone, jealous gunman, who killed his ex-wife in her place of employment in a shopping centre near Victory Monument yesterday afternoon, has been arrested.

The 34 year old gunman was arrested in a home in Phetchaburi, south west of Bangkok, at 4.30am today. He has been charged with pre-meditated murder, illegal possession of a weapon and carrying a gun in public.

He has allegedly confessed to all charges. Police took the man back to the Phayathai police station, near to where the incident happened.

Yesterday, Bangkok police reported the shooting of a woman at the Icon Clinic in the Century Movie Plaza. A bystander was also shot during the incident. The gunman fled the scene straight after the shooting.

The deceased woman was a 28 year old staff member at the clinic. The injured person was a fellow staff member, according to police. Witnesses report seven shots were fired.

Bangkok Metro Police announced that they’d identified the suspect as Danusorn Nooncharoen, the ex-husband of the victim. The gunman reportedly worked in security at the Siam Paragon shopping centre. According to police, the couple divorced last week after 10 years of marriage.

Police speculated that the incident was motivated through jealousy of a new man in his ex-wife’s life.

Police reported today that they had found a suicide note from the gunman where he wrote that he was going to kill his ex-wifes’ new lover and then kill himself.

The shooting happened 10 days after a deranged Thai army soldier opened fire inside another shopping mall in Korat, north east Thailand. The rampage left 30 people dead, including the gunman, plus another 50+ injuries. It was also 5 weeks after another shooting at a Lop Buri gold shop at the Robinsons Shopping Centre.

Despite all these incidents and the prevalence of guns in the hands of private citizens in Thailand, there has been no discussion from government officials about better gun controls.