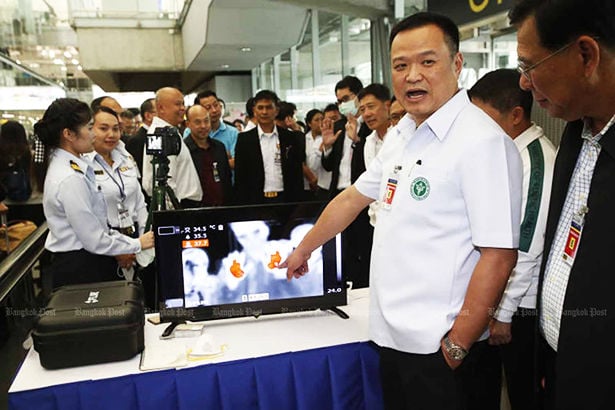 A 61 year old Chinese tourist, found to be infected with the new strain of coronavirus dubbed “Wuhan or Chinese pneumonia” when she arrived in Thailand last week, is being treated in hospital and is expected to be discharged in a few days. This is from the Public Health Minister Anutin Charnvirakul. The woman is recovering at Bamrasnaradura Infectious Diseases Institute in Nonthaburi province, about 12 kilometres outside of Bangkok.

“She is now showing few fever or respiratory symptoms, and if doctors give her a clearance she could be allowed to go home in as little as a few days. She was the first person detected with the virus outside of China and her rapid diagnosis and successful treatment show the efficiency and effectiveness of Thailand’s health services.”

Sixteen people who shared the flight with the woman were also examined, all with negative results, although some exhibited slight flu-like symptoms.

Since January 3, a total of 12 passengers arriving from from Wuhan in China have showed flu-like symptoms which justified their being quarantined. Eight have so far been treated and discharged

The Chinese woman was treated in an isolation ward. Her infection with the coronavirus was confirmed on Sunday. The Public Health Ministry had not found anyone else infected with the virus.

59 people in China have been confirmed infected with the new strain of the coronavirus, which has been linked to a sudden outbreak of pneumonia in central China that has killed one. All had attended markets selling animals and seafood in Wuhan city and were either workers or buyers. There has been no known human-to-human transmission of the virus.

Huanan Seafood Market, one of Wuhan’s largest meat and seafood markets has been identified as the source of the outbreak and was shut down on Jan. 1. The man who died had recently been a customer.

Coronaviruses are not necessarily life-threatening but have been the source of several public health crises, including severe acute respiratory syndrome, or SARS, which killed hundreds of people after an outbreak in southern China in 2002 and 2003.

The Wuhan viral outbreak appears less virulent and less transmittable, according to the World Health Organisation.