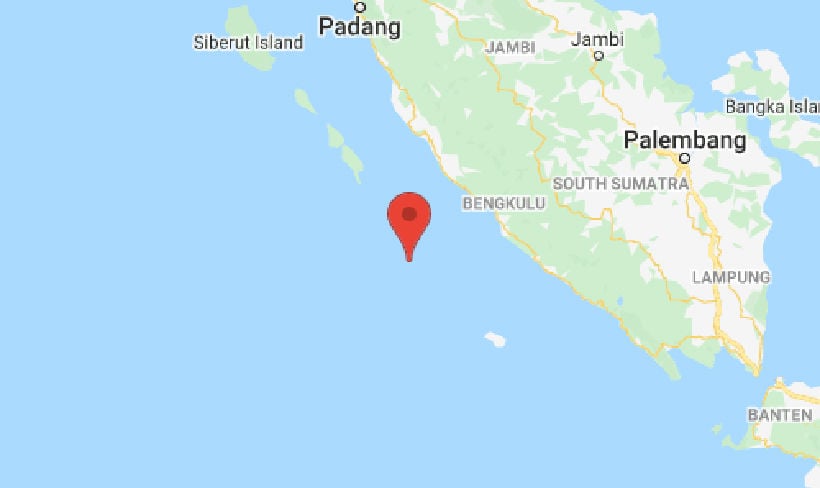 2 large, shallow earthquakes, of magnitude 6.8 and 6.9, struck off Indonesia’s Sumatra island early today, according to the US Geological Survey. No tsunami warning was issued and there were no immediate reports of casualties or major damage. Terrified residents fled their homes when the twin offshore quakes rocked Bengkulu city on Sumatra’s western coast. Bengkulu resident Jumentrio told AFP:

“The first earthquake was quick…but another one hit shortly after and it was just as strong. My children screamed hysterically.”

The area was hit by a string of aftershocks, according to Indonesia’s Meteorology, Climatology and Geophysics Agency.

“But until now we haven’t received any report of damages due to the earthquakes.”

The quakes struck within 6 minutes of one another from 5:23am local time at a depth of between 22 and 26 kilometres, respectively. Shallower quakes tend to cause more damage than deeper ones.

There is a “low likelihood of casualties and damage”, according to the USGS.

Indonesia, the world’s fourth most populous nation, has frequent seismic and volcanic activity due to its position on the Pacific “Ring of Fire”, where tectonic plates collide.

In 2018, a 7.5-magnitude quake and subsequent tsunami on Sulawesi island left more than 4,300 people dead or missing.

A devastating 9.1-magnitude quake struck off the coast of Sumatra in 2004, triggering a tsunami that killed 220,000 throughout the region, including some 170,000 in Indonesia.