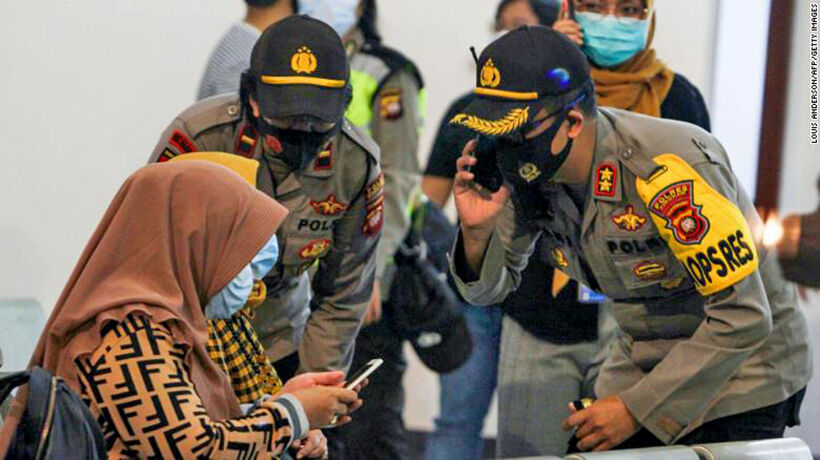 A Sriwijaya Air Boeing 737 jet in Indonesia, with 62 people on board, has crashed shortly after take off from Jakarta. The flight had taken off from Jakarta’s Soekarno-Hatta International Airport and was passing through 11,000 feet altitude when it lost contact. The Boeing 737-500, registered PK CLC, was a 26 years old aircraft.

The head of Indonesia’s National Transportation Safety Committee says Sriwijaya Air Flight 182 from Jakarta to Pontianak, on the Indonesian section of Borneo, lost contact with traffic controllers at 2:40 yesterday afternoon.

Indonesia’s national search and rescue agency announced that the 737-500 jetliner was believed to have crashed between the islands of Laki and Lancang, in the Thousand Islands chain, northwest of the capital, Jakarta.

3 fishermen, fishing off Lancang Island, told investigators they heard an explosion and “experienced a sudden large wave” around the time the plane lost contact with local air traffic control. One of the fishermen described the sound as “a bomb on the water.” It was raining at the time and heavily overcast.

The fishermen say they smelled fuel and spotted debris but didn’t see a plane crash into the sea. They returned to shore to report what they experienced to police.

The missing plane was carrying 50 passengers, 43 adults and 7 children, plus 12 crew.

Authorities are yet to report on the recovery of any bodies or remains during the search for the missing jet. A total of 28 ships, 5 helicopters and 2 search & rescue aircraft are taking part in the search. The Indonesian Navy has also deployed 5 warships and diving specialists to assist with the search efforts.

An emergency evacuation slide, reportedly from a Boeing 737, has already been recovered at sea in the search area where the crash was thought to have happened. The area between Laki and Lancang islands, is about 32 kilometres north from Jakarta.

Rescuers reported heavy rain and high winds in the search area. There have also been reports on the ground that people have found debris around Lancang Island. There is no current confirmation if the debris is associated with the missing plane.

Air traffic controllers say the plane dropped 10,000 feet in less than a minute before vanishing off their radars… that same information is confirmed on the global flight tracking service Flightradar24. The incident happened between 4-5 minutes after takeoff, according to the data.

Sriwijaya Airlines CEO Jefferson Irwin Jauwena has already claimed that the plane was in “good condition before it took off”.

“Of course we are very concerned about what happened to us with SJ 182. We hope that your prayers can help the search process run smoothly. We hope all is well.”

Boeing, still reeling 2 years after two Boeing 737 Max aircraft crashed – one very near this current incident north of Jakarta’s international airport and the other in Ethiopia – said…

“Our thoughts are with the crew, passengers, and their families. We are in contact with our airline customer and stand ready to support them during this difficult time.”

Sriwijaya Air is a budget carrier and Indonesia’s third largest airline, carrying more than 950,000 passengers per month. The airline is based at its Jakarta hub and flies to 53 destinations within Indonesia plus 3 regional destinations.

In 2014, Indonesian AirAsia Flight 8501 claimed the lives of all 162 people on board after also crashing into the Java Sea, while flying from Surabaya to Singapore. And in 2013 a Lion Air was involved in 2 accidents. A Boeing 737 missed the runway on landing and crashed into the sea near Bali, forcing passengers to swim or wade to safety, while another Boeing 737 collided with a cow while touching down at Jalaluddin Airport in Gorontalo on the island of Sulawesi.