Thomas Cook, the iconic British travel and airline company, has collapsed after last-minute negotiations failed to find a solution for the debt-ridden company. The tour operator’s failure affects 22,000 jobs worldwide, including 9,000 in the UK alone. Thomas Cook had been operating for 178 years.

The company is now bankrupt.

The collapse has triggered the largest ever peacetime repatriation aimed at bringing more than 150,000 British holidaymakers, spread around the world back to the UK. The emergency operation has been codenamed Operation Matterhorn. The British Civial Aviation Authority says that “all Thomas Cook bookings, including flights and holidays, have now been cancelled.

In anticipation of the inevitable decision, empty aircraft were already heading overseas, ready to take British tourists back from far-flung parts of the world, including Thailand.

(The Thaiger will have contact details for the hundreds of British tourists stranded in Thailand after the collapse as soon as they become available.)

Thomas Cook had secured a 900 million pound rescue deal, led by its largest shareholder Chinese firm Fosun last August, but a recent demand from its lending banks to raise a further 200 million pounds in contingency funding had put the deal in doubt. Executives from the holiday company spent all yesterday in talks with lenders trying to secure a salvage deal. The company had also asked the government for financial aid, a solution also urged by Labour and union groups.

Thomas Cook has blamed political unrest in holiday destinations such as Turkey, last summer’s prolonged heatwave and customers delaying booking holidays because of Brexit. But the firm has also faced fierce competition from online travel agents and low-cost airlines.

Another issue has been the company locking in bulk bookings up to two years ago, when the British pound was higher in value, but then being forced to pay its bills with a much weaker currency. 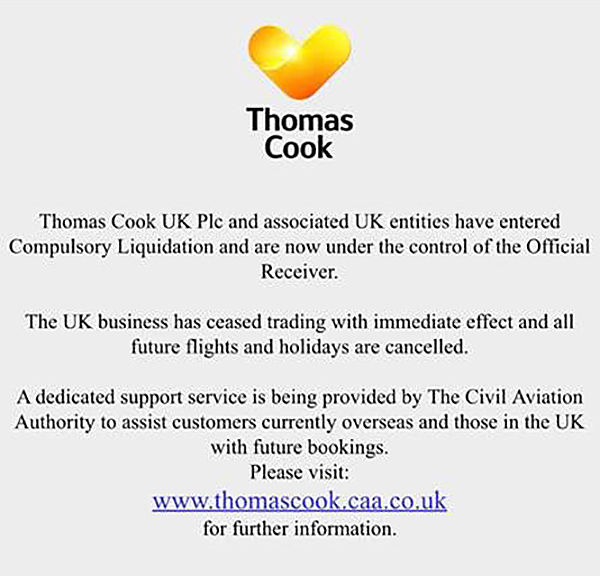