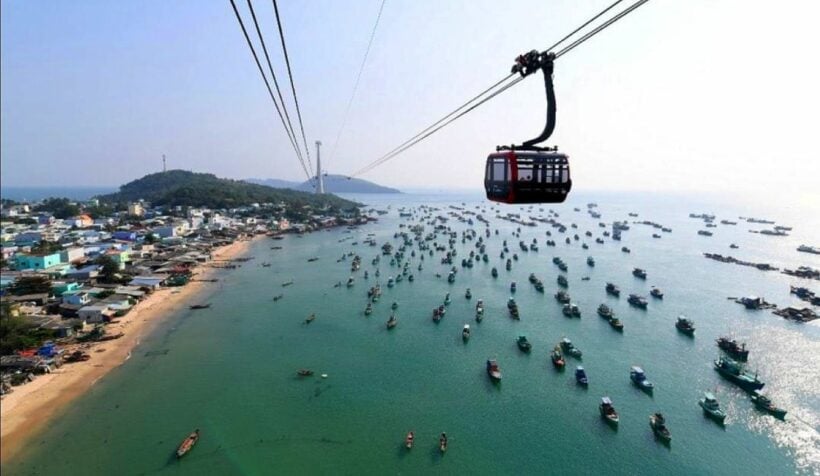 Phú Quốc is a Vietnamese island off the coast of Cambodia in the Gulf of Thailand (aka. Vịnh Thái Lan in Vietnamese). The island is actually closer to Cambodia than Vietnam. Phu Quoc is a rising star in the island destinations of south east asia. It has big ambitions and will catch up quickly with some key infrastructure already in place with more being hastily completed.

Long stretches of white-sandy beaches and resorts, most of which are along the palm-lined western coast. There are many, many resorts planned or in the midst of construction. More than half of the island is part of Phú Quốc National Park, which features mountains, dense tropical jungle, hiking trails and wildlife. Duong Dong is the largest town which the locals usually simply call Phu Quoc.

There are plenty of expat-owned bistros and bars that serve western and European tastes. You can also experience the local lifestyle by frequenting its many local markets and Buddhist temples.

There’s already some completed dual-lane main arteries linking the main parts of the island, a new international airport and hundreds of accommodation options, from the backpacker to the five star.

Our best go at pronouncing the name of the island is POR WOK, not POO KWOK, as you’d think, but Vietnamese has a lot of difficult-to-pronounce tones so check with a local when you get there.

Food options are truly international with a broad range of tourists making up the early visitors to the island. For now, principally east Europeans, Chinese and Vietnamese.

The main attraction is the longest cable car ride in the world. It’s an astonishing feat, linking the south of the island and hopping across three islands to a stand-alone resort on the southern-most island. Apart from being a world-class attraction, it’s also an indication of the vast sums being invested in the island.

You can fly in to Phu Quoc from KL, Bangkok, Singapore or Ho Chi Minh City for now with more flights and carriers getting a foothold on the popular new island. You don’t need a visa to visit Phu Quoc, a clear decision to kick off this new tropical destination by the Vietnamese government (for up to 15 days).

Here are 10 things to do in Phu Quoc that will give you a range of flavours, colours and culture.

Wow, wow and WOW! The cable-car ride from Vietnam’s Phu Quoc island to Hon Thom, aka. Pineapple Island, is a breathtaking experience. It’s an astonishing tourist attraction on an island that has ambitions to be one of south east Asia’s most popular tourist attractions. This attraction proves it.

The actual cable car ride, the longest in the world, soars over the sea, coral reefs, fishing villages and Phi Quoc’s southern islands, with amazing views all along the way. You get 360 degree vistas of the An Thoi Archipelago.

As a quick mood killer, if you’re afraid of heights, this experience may not be for you. Flying above the views below is breathtaking but you are flying a long way above the ground. Despite the windy day I travelled, the ride was very stable and you didn’t get a sense that you were wobbling around in the air.

The cable car travels from a purpose-built faux-Italian ‘ruins’ entrance and hub to Hon Thom Nature Park. From the moment you arrive, and the staff greet you as you get out of your taxi/bus/motorbike, there’s plenty of wow factor. For a small, relatively unknown Gulf of Thailand island, this is a grand experience and an enormous investment.

Once you arrive at Pineapple Island, after hopping over three other islands on the way, you are greeted by a man-made beach, water park and substantial infrastructure – some of it still being constructed. Everything on the island has been constructed to serve the arrivals from the cable car, there’s no other way of getting to this remote island. You can spend a short time at the island or a long time.

This was the largest place to keep communist soldiers in the South with more than 32,000 prisoners. Sometimes, this number was up to 40,000 people including political prisoners in several periods.

Slightly macabre but also a relic of a bygone era of Vietnam’s tortured history, Phu Quoc prison is the living evidence for the extremely brutal crimes of aggression colonialism and imperialism, while it proved the indomitable spirit and valiant struggle of revolutionaries. The war prisoners in Phu Quoc prison suffered extremely savage punishments and tortures. There’s plenty of mannequins propped up to provide a gruesome reminder of many of the tortures exacted on inmates.

The prison is located at the southern end of the island. 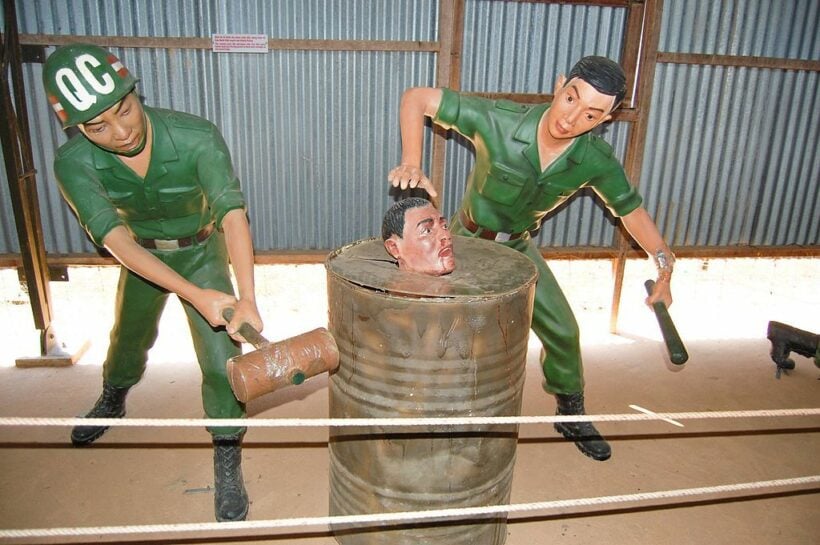 A bar and restaurant on the main beach, about 2 kilometres south of the main town centre. There’s also plenty of other casual attractions that pop up at this beach from time to time.

The most permanent venue is the Horizon Bar which serves some great food along with the refreshments you’d expect. You’re right on the sand, actually you can get a table in the sand which is a nice romantic touch for an evening meal or drink.

It’s not as swanky as some of the new beach clubs opening up but it’s a lot cheaper and casual as well. Looks a lot better at sunset and nighttime. There’s better food on the island but the location and view are fantastic. Located on the tourist strip south of the main town. 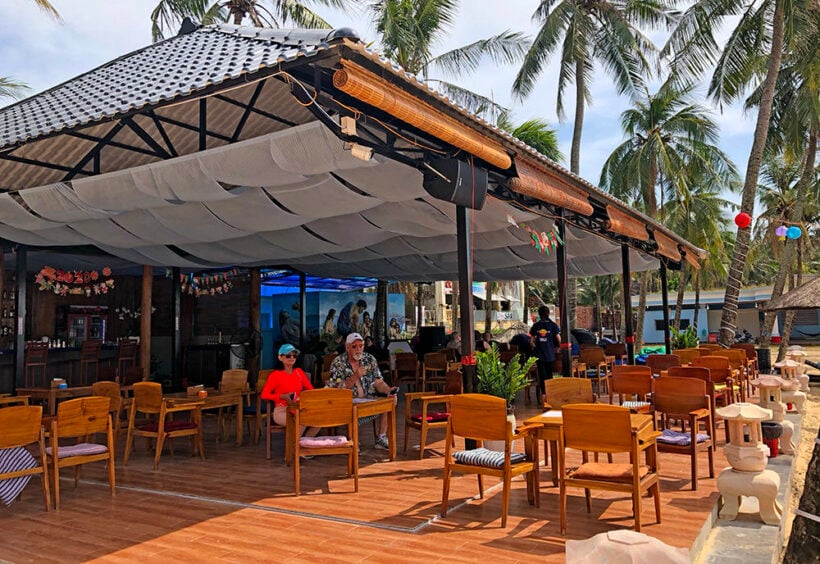 Also try the Sailing Club Phu Quoc for something a little more upmarket with prices to match. 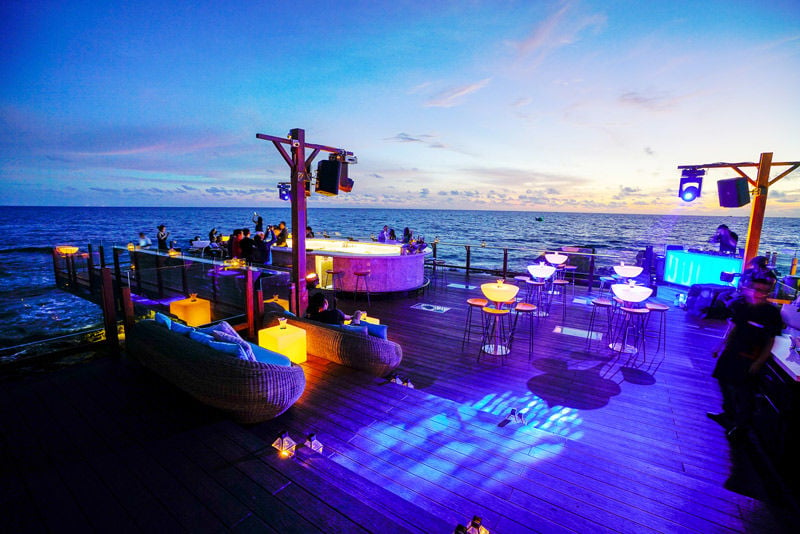 Long Beach is the best known of the southern-end beaches and has a range of accommodation, casual restaurants, bars and beach clubs opening up. It’s all about 2 kilometres off the main road. The main beach area has a range of beach attractions, jet-skis, vendors, sun lounges and a large selection of restaurants – all right on the beach. The clientele is very international.

BYO towels and suncream. The water is quite shallow and sand bars will show up at low tide. 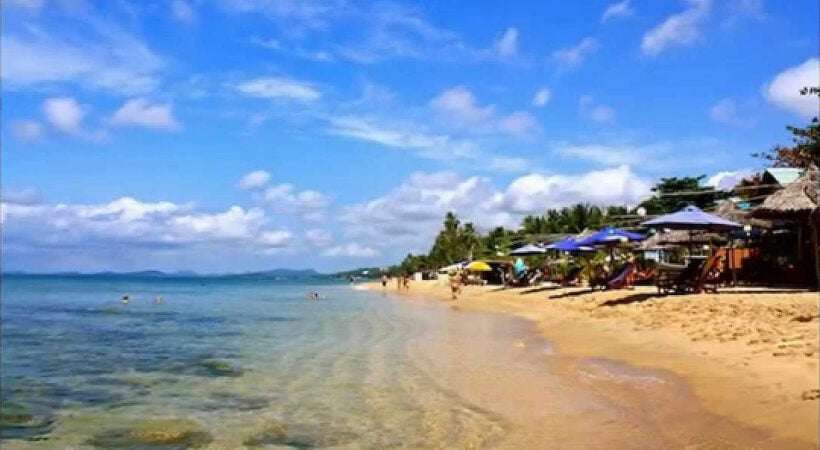 There was certainly a lot more people at this beach on the day we were there.

The largest and most ornate of the island’s temples, Trúc Lâm Hộ Quốc Zen has a number of pavilions and smaller temples all leading up to the tall white statue looking east towards Vietnam.

Dress appropriately. But there’s also scarves and over-pants available at the main gate.

There’s plenty of parking for motorbikes and cars and there’s a vegetarian restaurant on site that provides free food for visitors.

To get there take the windy road off the main road for about 5 kilometres. A lot of it scoots along the coast with some terrific views. Directions on the link. 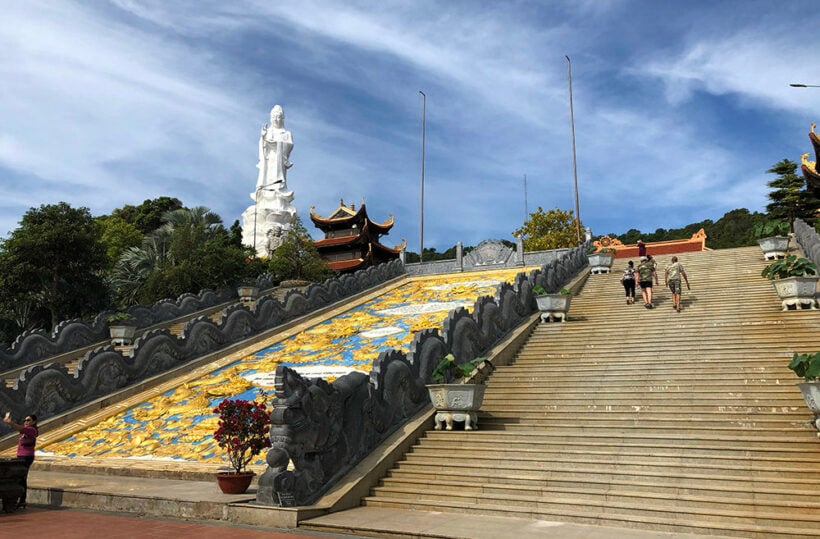 There are some key roads already sealed and completed, including plantings in the median strip. At the moment they’re mostly carrying the island’s locals on motorbike but they also allow you to easily get around to the key locations on good roads.

Although it doesn’t reach to the very north or south of Phu Quoc, there is a circle road that takes you from one coast to the other with some spots to check along the way.

But you can see the island growing along these completed arteries in the next decade.

There’s also good roads to the north and south taking you to some of the key beaches and attractions.

Vietnamese drive on the right hand side of the road. Car rentals are not common the island but motorbike rental is easy and cheap – around 150,000 Dong per day standard. Be careful and check your insurance first as any accidents on motorbikes may not be covered.

Vietnamese also enjoy tooting their horns to let other drivers know they’re around. 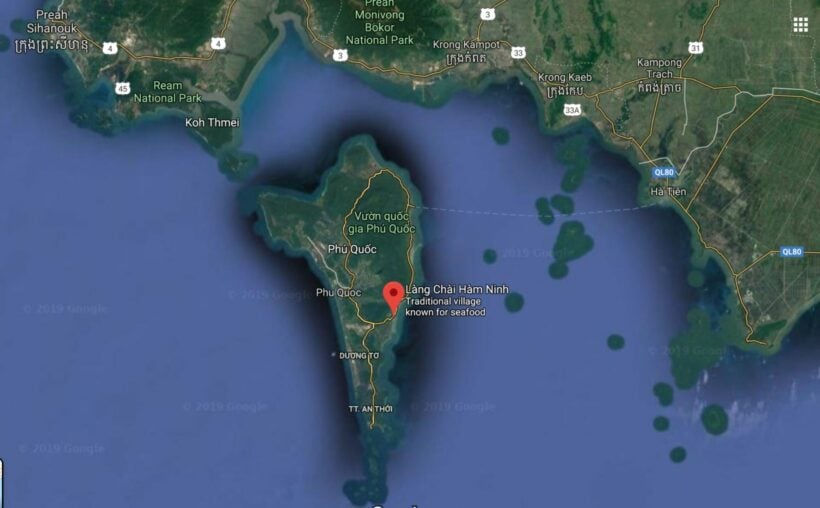 There’s a vibrant night market operating seven days a week in the middle of the main town.

It offers a plethora of dining and shopping opportunities until late. Located along Vo Thi Sau Street in the main town of Duong Dong, this pedestrian market is about a five-minute walk from Dinh Cau Rock. This Phu Quoc market caters mainly to tourists but will have plenty of locals visiting as well.

Live fish, sea snails, crabs and scallops are kept in large tanks with prices listed on the board in front of every booth.

The Dinh Cau Night Market is more about food than the nick-nacks but it will keep you occupied for a few hours. There is some quite exotic local food available here, not for the feint-hearted. Proceed with caution.

Not a tourist attraction and not anything that will blow your mind except that this modern little business has encapsulated a bar, restaurant, beach-club and a quality menu in one convenient location. Just moments from the heart of the main town Duong Dong, I Love Phu Quoc is worth a visit at any time of the day. A sunset drink with the beach-side beats is a good start to anything you have planned later in the evening.

They also do a terrific breakfast at I Love Phu Quoc which is, other than hotels, a little difficult to find if you’re used to a hearty western breakfast.

Dinh Cau Rock, also has the Cau Temple sitting atop. The actual rock is an odd-shaped natural formation where local fishermen pray to before heading out on fishing excursions (the main town is a hub for the local fishing industry). Located just next to the Duong Dong Fishing Harbour, the rock it features a brightly-coloured lighthouse and Buddhist shrine – a popular photography spot for travellers and romantic walks along the pier. It sits at the entrance to the harbour where the fishing boats leave each day.

Dinh Cau Rock was constructed in 1937 to commemorate Thien Hau (the goddess of the sea), whom locals believe provides protection for fishermen heading out to the open sea. 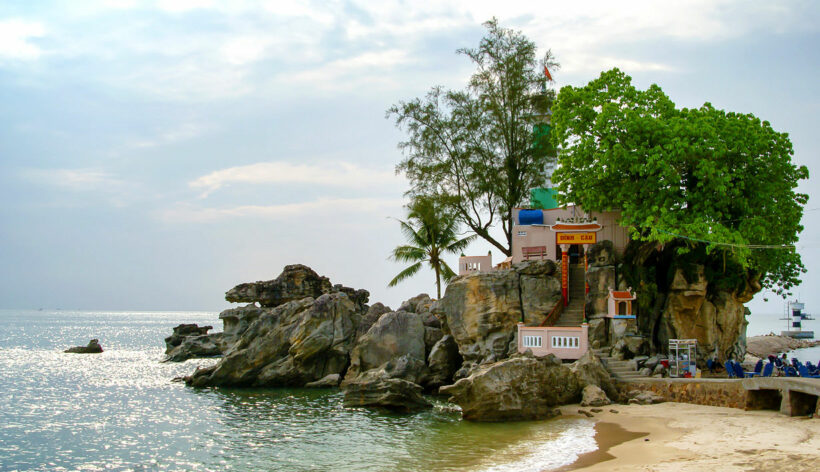