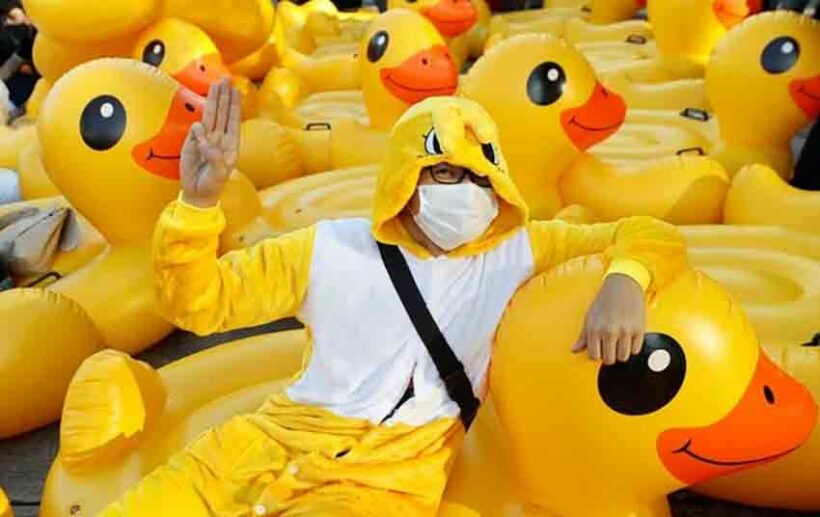 Yesterday’s anti-government protest at the headquarters of the Siam Commercial Bank in Bangkok was dominated by one prominent symbol – the yellow duck. Having been used at protests in Hong Kong earlier this year, the rubber duck has also become a regular feature at the Thai protests, a symbol of mutual support between both pro-democracy movements.

At yesterday’s rally outside the SCB building, the duck could be seen everywhere, with enterprising vendors selling t-shirts, toys, hats, torches and hair pins, all bearing the yellow duck’s image. Thai PBS World reports that 3,000 coupons, worth 10 baht each, were distributed to people who could use them to purchase the souvenirs. Protest leader Parit Chiwarak made his appearance at 3pm, wearing a yellow duck costume.

Meanwhile, 87 year old renowned academic Sulak Srivaraksa arrived to address the crowd, accompanied by an assistant and moving with the aid of a walking stick. He used his speech to condemn the use of the lèse majesté law against protesters. He pointed out that the late King Bhumibol had described use of the law (Section 112 of the Criminal Code) as an assault on him and that invoking it undermined the Monarchy.

He has called out PM Prayut Chan-o-cha on the invocation of the law, adding that His Majesty King Vajiralongkorn has previously also asked that Section 112 not be used. Sulak has demanded the PM’s resignation, accusing him of undermining the Monarchy and bullying His Majesty the King.

“Why doesn’t Prayut comply with the late King’s wish?”

Yesterday’s protest was originally set to take place at the Crown Property Bureau, but organisers took to social media the night before to announce a change of location to the SCB headquarters. Protest leaders say the change was to avoid a confrontation with royalists, who they claim were being deliberately sent to provoke them.

The last-minute change caused chaos for police, who ended up being thin on the ground at the new location, with thousands already deployed at the original CPB site. They had also trucked in around 80 containers to use as barricades that would prevent protesters from getting near the CPB building. Police later had to apologise for the traffic chaos caused by the containers, with routes blocked and motorists and public buses inconvenienced by the heavy congestion.