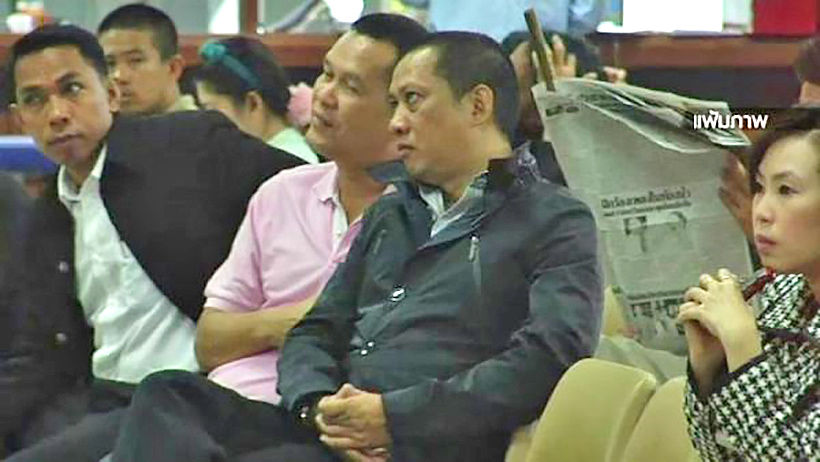 Another blow to the ruling Palang Pracharath party and coalition after the MP for Kamphaeng Phet province, Pol Lt-Col Waipote Arpornrat, lost his Member of Parliament status after the Supreme Court upheld the 4 year prison sentence handed down by the Appeals Court for his involvement in the disruption of the ASEAN Summit in Pattaya back in 2009.

As the Supreme Court is the final arbiter in the case, Deputy PM Wissanu Krea-ngarm said that Pol Lt-Col Waipote immediately loses his parliamentary membership and is not protected by parliamentary immunity.

12 former leaders of the United Front for Democracy against Dictatorship, including Waipote, were sentenced to 4 years in prison for their roles in leading hundreds of red-shirt protesters in the storming of the Royal Cliff Beach Resort in Pattaya, where the ASEAN meeting was being held, resulting to the abrupt cancellation of the summit and evacuation of all ASEAN leaders.

Meanwhile, a Palang Pracharat party source said that the party might field Waipote’s son, Mr. Petchapoom, to contest the by-election in Constituency 2 of Kamphaeng Phet province.

Whilst the four year sentence may appear severe for the protests at Pattaya a decade ago, the Deputy PM, and one of the key government figures, Wissanu Krea-ngarm took no time in condemning his actions and announcing that he loses his parliamentary position. Meanwhile, Wissanu has shown much great leniency towards the Palang Pracharat ‘fixer’ Thammarat Prompao, the MP for Phayao province, over his 4 years spent in prison in Australia for heroin drug trafficking.

Captain Prompeao has dismissed the Australian court papers revealed in a Sydney Morning Herald article last Monday as heresy and exaggerations. In parliament yesterday, he told parliament that the reports and court records were wrong.

The Palang Pracharat coalition of some 19 minor parties can ill afford to lose any more MPs as it nears a dangerous minority government situation where opposition MPs outnumber the coalition, leaving the government open for a no confidence vote.

Vietnam versus Thailand – which is the best for travel or living?

MP formally breaks away from the coalition over Thammanat Prompao remarks

The opposition party has created a new subcommittee to push for the removal of embattled Deputy Agriculture and Cooperatives Minister Thammanat Prompaew after the Constitutional Court’s ruling last week that he is fit to serve despite his Australian drug trafficking conviction. The Court ruled that the minister, a member of the Palang Pracharath Party, is qualified despite spending 4 years in prison in Australia in 1994.

Move Forward Party member of Parliament Thiratchai Phanthumat is the spokesperson for the House Committee on Suppression and Prevention of Corruption and Misconduct. He heads the new subcommittee and is investigating and pursuing legal action against Thammanat for various allegations and accusations of misconduct.

Hiding information about his Australian criminal record before receiving royal decoration and joining the cabinet could be a violation of ethical code. The subcommittee also seeks to learn more information about the drug smuggling between Thailand and Australia which resulted in Thammanat’s prison sentence. The leader of Seri Ruam Thai chairs the House committee and confirmed that there are still 3 years before the expiration of the statute of limitation on Thamanat’s 1993 drug conviction.

The subcommittee is requesting the Office of the Narcotics Control Board, along with any other state agency with information or involvement, to share their data and further investigate.

The Constitutional Court had given Thammanat a pass saying that convictions and jail sentences must be from Thai courts, as foreign courts cannot make legally binding rulings in Thailand. The conviction in the New South Wales Court in Australia therefore would be disregarded in the consideration of whether or not Thammanat was eligible to hold his cabinets post or any other political position.

51 Move Forward Party members of Parliament, opponents of the PPRP, had petitioned for Thammanat’s removal after details resurfaced regarding his heroin smuggling conviction and prison sentence in Australia.

Stock photo via US National Archives

The Royal Thai Police say new uniforms will help them be more “agile” in their pursuits of criminals. The uniform’s prototype is still under trials and has yet to be launched. The move to change uniforms has been attempted in the past, with tourist police once seeing their usual long-sleeved khaki shirt with shoulder pads and metal badges morph to short-sleeved shirts and blue shorts. But previous modifications to their attires was short-lived.

Somprasong Yenthuam, the deputy commissioner of the Metropolitan Police Bureau has been assigned by the police chief to oversee the uniform change this time around. A committee has been formed to study the input gathered from officers across the country, as well as the public. But the police chief wants the new uniforms to be suited to patrol operations with a final decision being made after a 10-day trial period of the uniforms.

The new style of uniform is currently being tested at the 3 police stations of Chakkrawat, Bang Yi Khan and Bukhalo in Bangkok. The trial started on May 3 and will run until this Thursday, with 10 active-duty officers, at the operational level, trying out the new uniforms.

“The three police stations were chosen because they are ready for the trial as the areas under their jurisdiction are fairly large with many residents.”

The uniforms feature a baseball-style cap, which is much lighter than the traditional police helmets, and a shirt with 2 panels. The upper panel is made of khaki while the lower is made from a more breathable fabric which is easy to launder. The new badges are made of cloth, taking into account previous complaints by officers of the badges’ jagged edges injuring them while working. The new pants feature an elastic waistband and multiple pockets. The new shoes are designed for running without causing foot pain.

“The committee has studied police uniforms from around the world before deciding on the prototype. But what is most important is the opinion of police officers who use it, and the public. Whether the proposed new police uniform will convey less power or authority remains to be seen. It is not finalised yet and can still be changed.”

The new uniforms cost around 2,000 baht but Somprasong says the department will use its annual provision to pay for the uniforms without needing to add more money. Krisanaphong Poothakool, an associate professor of criminology and assistant president at Rangsit University, says the new uniform must help officers be more agile.

“However, how the officers perform their duties and behave themselves in public is more important than their uniforms. Changing the uniform will be useless if the officers fail to improve their behaviour.”

Thailand is to remain on the US Trade Representative’s watch list as it tackles intellectual property violations and online piracy. Director-general of the Intellectual Property Department, Vuttikrai Leewiraphan, says the USTR made the announcement in its annual report that was released April 30. The report includes findings for more than 100 trading partners after engaging with stakeholders and further research.

“The US government admires the Thai government’s and Commerce Ministry’s progress in preventing IP infringement, the continuous development of IP protection and crackdowns on violations in both the offline and online markets.”

The report indicated that Thailand continues to make progress by seizing counterfeit and pirated goods and has increased efforts to combat the sale of those goods online, and publishing its efforts. It also noted that Thailand increased its efforts against online piracy, through intra-agency coordination, but concerns still remain as counterfeit and pirated goods are still readily available in markets and online.

In addition, the US has urged Thailand to ensure that amendments to its Copyright Act address concerns expressed by the US and other foreign governments and stakeholders, including overly broad technological protection measure exceptions, procedural obstacles to enforcement against unauthorised camcording, and unauthorised collective management organisations.

Vuttikrai has pledged to work with US agencies to build an IP work plan to remove Thailand from all US lists in the future. He said IP rights protections should lead to more Thais benefitting from IP, leading to an increase in the country’s competitiveness and economic development. But he has not released details on the counter-measures to be taken that would ensure the government is continuing to make strides towards addressing the issue of counterfeit and pirated goods even further.

Last year, the USTR released its annual report on Intellectual Property Protection and Review of Notorious Markets for Counterfeiting and Piracy, with Thailand being included among 22 other countries on the Watch List: