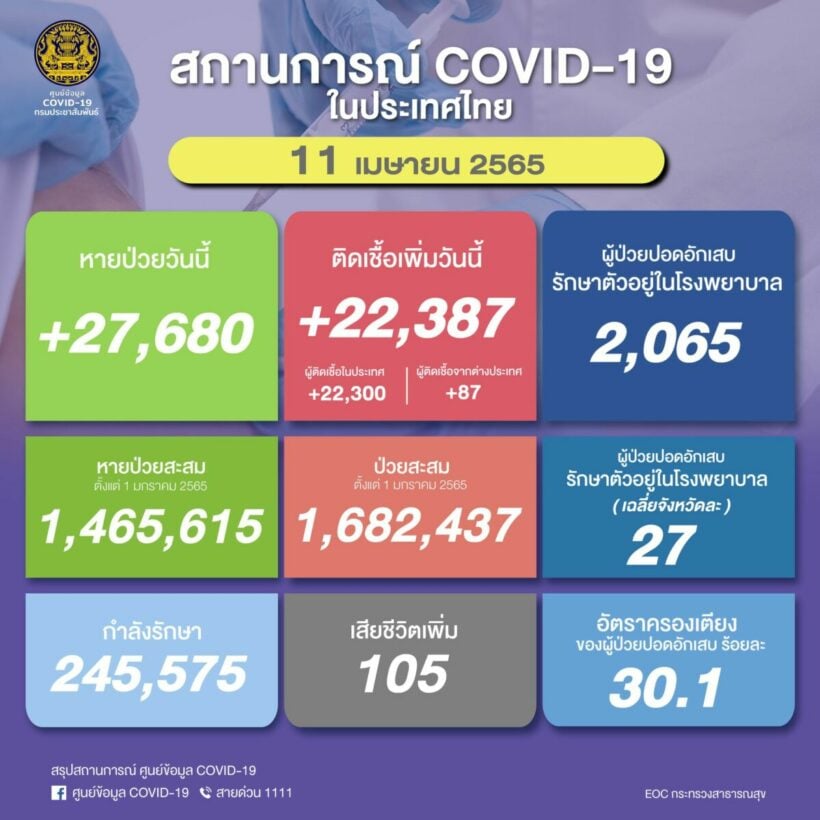 As people throughout the country begin their Songkran celebrations, Thailand’s daily death toll from Covid-19 has breached the 100 mark twice in the past 24 hours — with 108 deaths and 105 deaths reported for yesterday and today, respectively.

Sunday marked the first time the nation recorded a hundred daily deaths from the virus this year. The Public Health Ministry also reported more than 25,000 new infections yesterday, while more than 25,000 recovered patients were released from hospitals. Today, nearly 22,400 are infections were reported.

As of Sunday, almost 251,000 patients were being treated in hospitals and other medical facilities across the country. Meanwhile, there were nearly 2,000 hospital patients were receiving treatment for lung infections, nearly 850 of which were on ventilators.

After the Songkran holiday, the daily infection rate is predicted to shoot up to between 50,000-100,000 cases, according to the Head of Siriraj Hospital Faculty of Medicine, Dr. Prasit Watanapa. The silver lining, he says, is that the daily death toll likely will not not exceed 200. If it does, the amount of severe cases would be enough to overwhelm existing treatment facilities.

Beginning Friday evening, Thais began leaving Bangkok and other major cities for domestic vacation destinations or their home provinces. The official Songkran public holiday begins on Wednesday, April 13, and ends on Friday, April 15, though celebrations will begin today and last through the weekend.

Following is the daily death toll so far for the month of April:

Thai YouTuber complains about Test & Go: ‘Foreigners won’t come back if facing this…’