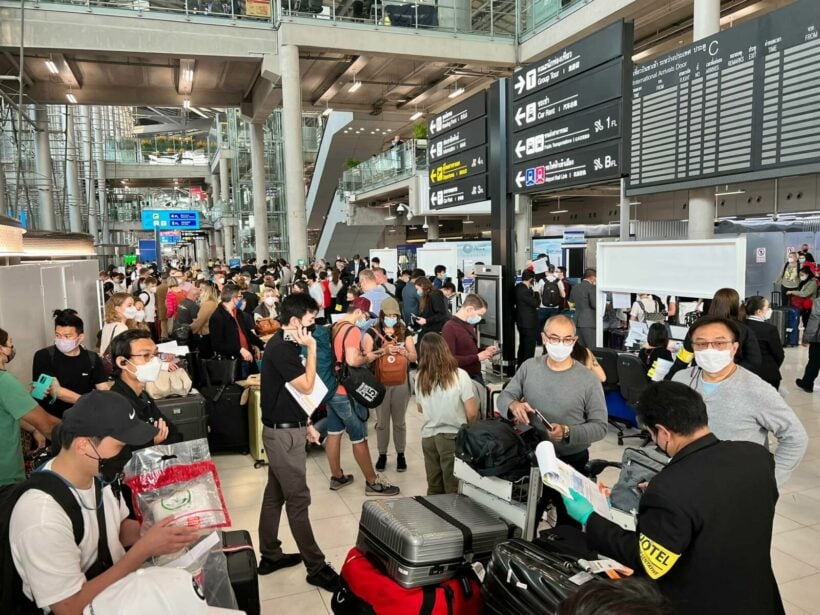 After reportedly seeing crowds of tourists left waiting for hotels at Suvarnabhumi International Airport, a Thai YouTuber has voiced his discontent about Thailand’s unpopular Test & Go entry scheme. He said the system was a mess, with hotel staff having to shout to finding their guests, while tourists searched for the logos of their hotels, “as if they were playing a puzzle game”.

Atichan Cherngchavano, who goes by his online alias “Au Spin9”, is a popular YouTuber reviewer of IT products in Thailand. On Sunday, he posted pictures of crowds of international travellers at the airport on his personal Facebook page, together with a caption complaining about the Test & Go program and airport management. (Thais also have to go through the Test & Go or Sandbox programs when re-entering Thailand).

In his post, which quickly went viral, he said…

“This is how Suvarnabhumi airport manages the passengers from the Test & Go program. No one can leave. The travellers stood still while various hotel staff shouted out their hotel’s names to find their customers until their voices cracked. Some staff shook their heads in disappointment. Some travellers were angry at the staff, while the staff blamed the airports of Thailand.”

Au continued with his complaint, saying…

“The situation looked just like playing a game to find hotel logos. Everything was ordered randomly, with no alphabetical order and no directory. One counter had tons of hotel logos, and one staff was responsible for more than one hotel. Even if the travellers could find their hotel, they still had to stand like that, waiting for their queue to talk with the staff. This was considered to be just a first mission. More difficulties in this city awaits them. Foreigners won’t come back again if they have to face this.”

Many Thai netizens liked and shared his post, with some saying they’d had similar experiences. In the comments section, Au said he wanted the people who launched the program to try using it themselves, so they could realise its problems and the chaos at the arrivals area of Thailand’s main airport.

Au ended his post with a sarcastic comment, saying those who launched the program may never notice these problems, as they might have their own “convenient channels” to enter the country.