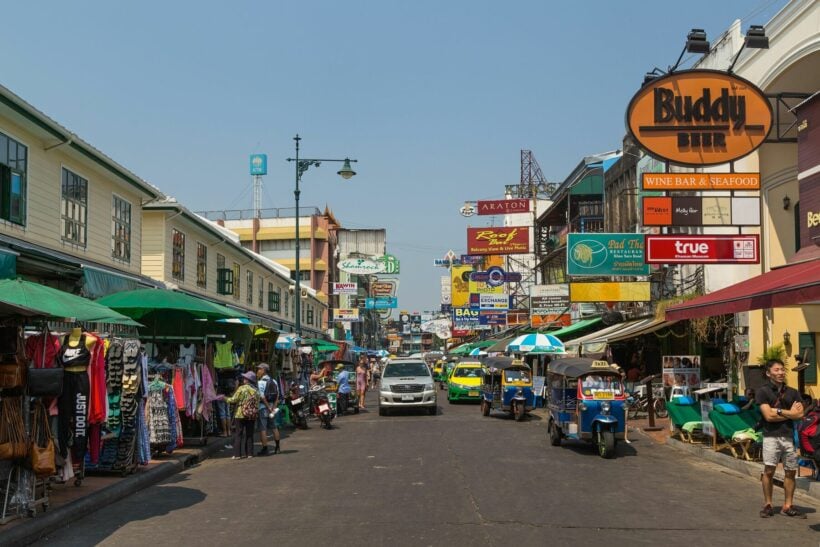 A view of Khao San Road in Bangkok before the pandemic. This year, businesses on the tourism hotspot opted to cancel their Songkran celebrations, as the government imposed strict Covid-prevention measures and liabilities for business owners who would apply to hold social-distanced celebrations. Credit: Marcin Konsek | Wikimedia

As Thailand’s annual Songkran festival begins this week, all eyes are on the government to see how its strict Covid-prevention measures will affect tourism spending and mitigate new infections, which are expected to spike after the holiday.

As the war in Ukraine continues to hike up global oil and food prices, pundits say how Thailand fares during and after the festival will be a litmus test for the health of the nation’s economy for the rest of the year.

This year, the government is once again imposing strict limitations on festival activities, including a water splashing ban, which has deterred many local hoteliers from holding Songkran celebrations to attract international tourists, as the tourism industry looks to the domestic market for profits this year.

Already, experts are predicting a less than spectacular week for tourism spending, with fewer people predicted to travel back to their hometowns during the so-called Seven Dangerous Days, when road traffic is usually the most congested and risky.

According to the Tourism Authority of Thailand, although the tourism industry will likely see an improvement in domestic tourism spending during Songkran, it will not be enough to revive the industry, which last year contributed just less than 10% of the nation’s GDP.

“Further relaxation is necessary for the tourism industry. We started this process last year and should not be left behind. However, any decision will depend on public health authorities weighing the importance of the economy and local confidence, as some people remain concerned about the viral situation in the country.”

WilliamG
35 minutes ago, Janneman said: Covid numbers are dropping fast. In which countries please?
Ramanathan.P
No point in harping on Ukraine war. Every country has to find a way to resolve their own issues. There are 1001 ways the slugging economy can be revitalized. Thailand has to go for the low lying fruits which is…

Poolie
3 minutes ago, Ramanathan.P said: No point in harping on Ukraine war. Well, wouldn't that be a breath of fresh air? 😀
BBY
Talking to friends in a village near Sukhothai. The current situation there is, that about a week ago they had a confirmed infection. Today the news is that most if not all of the village has Covid. So yes it…

riclag
It seems to me many govts are using the crisis in Ukraine to deflect from what covid restrictions caused! Imop Never let a crisis go to waste! Cost of food and petroleum were increasing steadily here and other lands according…