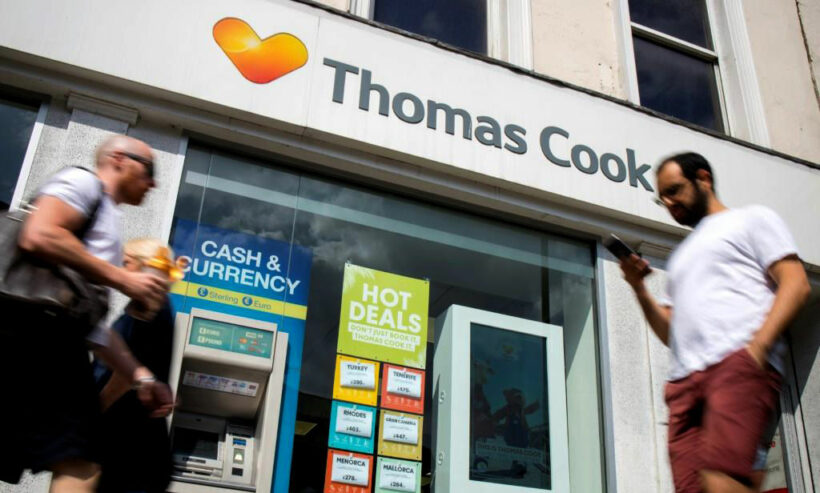 Unable to adapt to the move online as smaller, nimbler travel companies thrive, Thomas Cook, the household name in international travel, is close to financial collapse. And the collapse could leave up to 150,000 British tourists stranded overseas.

The iconic British travel giant Thomas Cook say they’ve failed to find any further private investment to stave off collapse and now relies on an unlikely government bailout. The group is blaming “Brexit uncertainty” as the major problem with their current malaise.

The operator announced they needed £200 million (US$250 million) – in addition to the £900-million rescue deal secured last month – or else face administration, which could potentially trigger Britain’s largest repatriation since World War II – customers who are currently overseas.

A source close to the negotiations told AFP the company had failed to find the £200 million from private investors and would collapse unless the government intervened. Without another bailout by its Chinese major shareholder Fosun, the brand’s financial options are few.

But ministers are unlikely to step in due to worries about the pioneering operator’s longer-term viability leaving it teetering on the brink of collapse and stranding up to 150,000 British holidaymakers abroad.

“We will know by tomorrow if agreement is reached,” the source told AFP. The firm’s shareholders and creditors are scheduled to meet from 9 am (0800 GMT) on Sunday morning, followed by a meeting of the board of directors in the afternoon.

The Transport Salaried Staffs Association, which represents workers at the company, called on the government to rescue the firm.

“It is incumbent upon the government to act if required and save this iconic cornerstone of the British high street and the thousands of jobs that go with it,” said TSSA General Secretary, Manuel Cortes.

“The company must be rescued no matter what.”

The government at the time described it as Britain’s “biggest-ever peacetime repatriation”.

Thousands of workers could also lose their jobs, with the 178 year old company employing about 22,000 staff worldwide, including 9,000 in Britain.

Chinese peer Fosun, which was already the biggest shareholder in Thomas Cook, agreed last month to inject £450 million into the business. In return, the Hong Kong-listed conglomerate acquired a 75% stake in Thomas Cook’s tour operating division and 25% of its airline unit.

Creditors and banks agreed to inject another £450 million under the recapitalisation plan announced in August, converting their debt in exchange for a 75% stake in the airline and 25 percent of the tour operating unit.

Thomas Cook in May revealed that first-half losses widened on a major write-down, caused in part by Brexit uncertainty that delayed summer holiday bookings. The group, which has around 600 stores across the UK, has also come under pressure from fierce online competition.